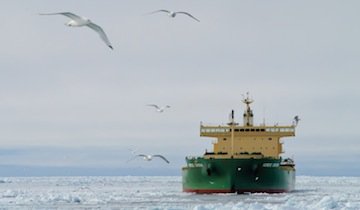 VANCOUVER, British Columbia—A Danish-owned, coal-laden cargo ship has sailed through the Northwest Passage for the first time and into the history books as the second bulk carrier to navigate the Arctic route.

The Nordic Orion left Vancouver on September 17, carrying 15,000 tonnes of coal. Ed Coll, CEO of Bulk Partners, an operational partner of ship-owner Nordic Bulk Carriers, said Friday that the freighter has passed Greenland. He said it is expected to dock in Finland next week after traversing waters once impenetrable with thick ice.

The 738-foot (225-metre) Nordic Orion, a Panamax-sized ship, has a strengthened bulkhead to cope with floating ice, as well as more steel and other features that make the heavy vessel suitable for the extreme Arctic conditions.

By sailing through the Northwest Passage, the Nordic Orion was able to trim about 1,000 nautical miles, which translates to four days, from its usual route through the Panama Canal. It was also able to carry about 25 percent more coal, given how shallow the canal is. These benefits have resulted in savings of nearly $200,000 said Bulk Partners.

“But even if there wasn’t huge savings we would have done it just to do it, to pioneer it,” said Coll.

Interest in the Northwest Passage is on the rise as climate change is melting Arctic sea ice, creating open waterways. The melting ice could make it a regular Atlantic-Pacific shipping lane.

“Climate change is advancing more quickly to the point where the Northwest Passage has become a more viable shipping route, roughly 30 years earlier than most scientists estimated it would,” said Michael Byers, an international law expert at the University of British Columbia.

“I don’t celebrate the opening of the Northwest Passage to shipping because it does raise enormous challenges to Canada and for countries around the world in terms of dealing with climate change and its consequences.” Coll said while the reality of melting ice is somewhat unsettling, it has also opened up a new frontier.

Canada has laid claim over ownership of the passage but it is joined by Russia, the US, and Denmark in drafting claims before a UN commission to extend their undersea boundaries into ice-blocked areas.

The Nordic Orion will not undermine Canada’s legal position that the Northwest Passage constitutes internal waters, since the ship has registered its voyage with the Canadian Coast Guard, which means it has received Canada’s permission.

It has been more than four decades since the oil tanker SS Manhattan sailed through the Northwest Passage to test its feasibility as a trade route to deliver Alaskan oil to the US East Coast, avoiding a long trip south to the Panama Canal. But its ice-hampered 1969 journey deterred others and the Americans opted for an oil pipeline to move Alaskan crude south.

The Nordic Orion has sailed through the west coast of Greenland—an area Coll described as the most dangerous, with floating icebergs—but he said the vessel experienced only one choke point, at Peel Sound in northern Canada in Qikiqtaaluk, Nunavut, leaving it well on its way to having successfully navigated the passage.