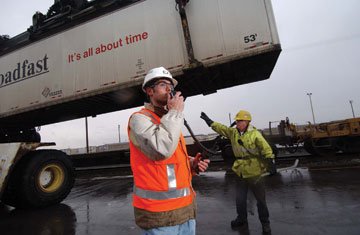 TORONTO: CN is making capacity improvements to accommodate growing container volumes at its Brampton Intermodal Terminal (BIT) and to ensure a high level of service for intermodal customers across its system.

Claude Mongeau, president and chief executive officer of CN, said: “Intermodal is one of CN’s fastest-growing business segments. We are investing in new track, equipment and other infrastructure improvements at BIT to take our intermodal service offering to the next level in efficiently distributing growing overseas container traffic reaching our network over Canadian ports as well as rising domestic intermodal shipments across Canada.”

Charles Campbell, managing director of NYK Line (Canada) Inc., part of the international marine transportation company and the NYK Group, said: “As is evident in many areas of CN’s intermodal operations, we have seen major improvements at Brampton Intermodal Terminal. The shortening of turn times at BIT reflects this effort. In general, the service level across the CN network has improved as CN continues to listen and react to customer input.”

BIT’s 2011 intermodal volumes through the end of April increased by 12 percent over figures for the comparable period of 2010.