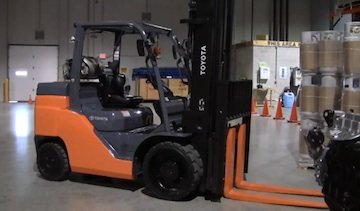 Canadian buy a higher proportion of electric forklifts than Americans

Hot on the heels of launching its newest lift truck line, the Toyota 8 Series, Toyota Material Handling USA Inc executives sat down with MM&D to discuss the differences between the Canadian and the US markets, and how the vehicles are likely to evolve in the future. Click here to watch MM&D videos detailing the new fork truck.

Even though Canadian industry is tightly integrated with what happens on the US side of the border, Toyota Material Handling president Jeff Rufener can easily see differences between what Canadian forklift customers buy versus what gets sold in the US.

“I think it tends to be influenced by the European market more than it is by the US,” Rufener said.

“Canada seems to buy a lot more electric trucks than we do in the States. Canada is more 45 electric:55 IC. We’re more like 40 electric:60 IC,” he said.

He said he could easily see even higher voltage trucks—specifically 80-volt vehicles—selling well in the Canadian market, if Toyota offered them. Trucks with pneumatic tires are also more popular in Canada than they are in the US.

“We usually say Canadian sales are about 10 percent of US sales, but actually it’s a bit less than that. Looking at the numbers, it’s more like seven percent of our total sales,” says Jimenez. “The interesting thing I did see is Canadians tend to buy a higher percentage of three-wheelers. The three-wheeled electric is a dock-to-stock type of truck. It’s a multi-purpose unit used to off-load the trailers, take the goods into the warehouse and put them back into the trailer.”

He added that in comparison, Toyota’s most popular products in the US are the Class 4 and Class 5 ICE trucks.

While Rufener and Jimenez were excited to talk about what’s new in the 8 Series and especially about using Toyota-designed and built diesel and gasoline/LPG engines, they did offer some insights into what type of advancements to expect in future fork trucks.

“I think the markets that are typically served by the internal combustion market are more mature. I think we expect the development there to be more incremental. The electric sector provides more opportunity for technology advancements. That’s why I divide our industry into two pieces. Part of it is incremental growth, the other part more market growth,” explained Rufener.

While the Toyota 8 series was designed to meet the EPA’s (US Environmental Protection Agency) latest emissions standards, known as the Tier 4 final regulations, not all of the company’s lift trucks are capable of doing so, at least not yet.

“We still have one more project related to the internal combustion trucks, which is the heart-of-the-line trucks, the 3,000lb to 6,500lb models. We still have the challenge of meeting the Tier 4 final regulations for that. So we are coming out with a solution next year for that,” says Jimenez.

On the electric side, the company is looking for technology that will improve performance, said Jimenez. “We are working a lot on the electric equipment. We have a lot of products coming down the pipeline from our Class 1, Class 2 and Class 3 products. We are continuing to add new technology, like AC technology.” Although Toyota now uses AC technology, the company sees its further development as a way to better meet the needs of fork truck buyers.

“The idea is to add the AC technology to more of our products because we still have some of our products that are DC technology,” said Jimenez. “With all the EPA and CARB (California Air Resources Board) regulations, some end-users are starting to have to look at other alternatives for their product needs. Some of those end up switching to electric, but the difficulty in doing that is they still have to meet certain productivity levels, and internal combustion [trucks] tend to have higher performance, faster travel speeds, faster acceleration rates, faster lifting speeds.

As for other means of powering the lift trucks, it doesn’t seem as if alternatives are likely to show up at Toyota dealers in the near future. “We’ve tried to look at fuel cells. That was a trend at one time. You still hear of hydrogen-powered lift trucks, but it’s more battery- replacement. But that’s gone really quiet as well because the government resources aren’t necessarily there,” said Jimenez.

Another technology buyers are unlikely to see is a hybrid.

“In Japan Toyota has launched a hybrid truck. We don’t see it coming here any time soon. It’s in a beta-test phase. It’s diesel powered with electric motors,” says Jimenez. “If we were to introduce a hybrid in the States for it to become successful, it would have to be gasoline powered, not diesel.”

One area where Toyota does see a lot of potential is in applying automated guided vehicle (AGV) technology to fork trucks. According to the company’s figures, the AGV market currently sits at about $100 million, but internal projections show that growing to $700 million by 2030.

Automating fork trucks isn’t easy. The vast range of tasks they are used for presents challenges that most existing AGVs don’t have to meet, said Rufener.

“Everybody understands why automation is more efficient, better, more economical, but AGVs have typically been used in manufacturing where the requirements are very static—where there is a very defined roll and travel path. They’ve been specialized in terms of design. All that means is they’re expensive.

“The trend we’re seeing today is to take these technology advancements in controlling the lift truck and apply them to an existing, traditionally designed piece of material handling equipment so you get synergies of mass production. Couple that with advanced control technology, and even the ability to put it on and take it off, perhaps use it as a manually controlled vehicle with an operator and then easily switch back to automated guided vehicles, that’s where the industry seems to be going, and where we’re focusing.”

Rufener says the most important future forklift advances could very well be the devices and software and systems used to manage the trucks. With the proper use of telematics and fleet management applications, businesses should be able to greatly improve the efficiencies of their fleets. Of course, applying these solutions comes with a price—a price Rufener says customers are often reluctant to pay.

When you describe the tenets of fleet management it’s like motherhood and apple pie—’Absolutely I want that.’ But if you give them an invoice that has fleet management as a line item, they’ll give it back to you.

“We have to be extremely efficient. We’ve got to be able to mine data that is generated by the lift truck, accumulate it, put it in the database, organize it, analyze it, feed it back to the customer, for almost nothing. When I buy the truck from you, what I pay for the lift truck is my expectation. My expectation is those asset management features, by and large, should be coming with the truck.” He added that for a fleet or asset management system to work most efficiently, it is best for all of the vehicles to come from one manufacturer.

FROM THE JULY-AUGUST 2013 MM&D PRINT EDITION