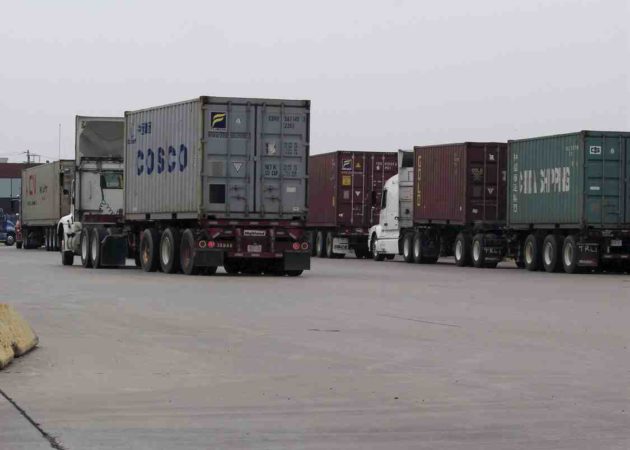 BRAMPTON, Ont. — Drivers serving the CN Rail Brampton Intermodal Terminal are once again complaining of excessive wait times at the facility, and a new drivers’ organization has formed with the intent of taking CN to task.

Company drivers, owner/operators and trucking companies serving the intermodal yard have been reporting increased waiting time for loading and unloading. Wayne Horan, an owner/operator who has been hauling cans on and off for about 20 years, says that wait time has become a major issue over the last six to eight weeks.

“It’s the worst I’ve ever seen,” he says. He claims his longest time spent waiting to get loaded is five-and-a-half hours but other drivers have reported being held up for six to seven hours. Worse, he says some company drivers are making as little as $35 per trip when hauling containers due to rate deterioration that occurred through the recession and they don’t get paid for wait time.

“They’re just trying to earn a living, but it’s an awful way to do it,” he says, admitting many drivers are forced to “play the log book” just to eek out a living. Hours-of-service violations are an elephant in the room that some container haulers are willing to acknowledge only to bring attention to the seriousness of the delays.

Sam Basra, owner of RS Rush Transfer Xpress, which has about 30 trucks serving the facility, says even when a driver has six hours of on-duty time remaining, there’s no guarantee they’ll have enough time to get in and out of the intermodal yard. If a driver runs out of allowable working hours while waiting to be loaded, a company must send a replacement driver or, as sometimes happens, turn a blind eye while the driver exceeds his legal hours. It’s ironic, Horan notes, since CN is vigilant about safety on its premises. And when a driver with dwindling hours get frustrated with the delay while waiting to be unloaded, leaving isn’t always an option. Horan says he has tried to leave the yard after experiencing a 4.5-hour wait to get unloaded and was turned back at the gate. He says he was told that leaving the yard before dropping the container would cost him a $90 ‘gate fee’ and $100 ‘lift fee’; $190 in fines he couldn’t afford to pay.

“It seems like they don’t care about us,” he says. “It’s like we’re not even human when we go through that gate.”

Several drivers have complained that there are only two portapotties available for drivers to use and no running water. (There are actually five portapotties, Louis-Antoine Paquin, manager of corporate communications with CN contends). Drivers are restricted from leaving their cabs while they wait, Horan says.

“We’re not supposed to get out of our trucks, but you wouldn’t put a dog in a vehicle for five or six hours and shut the door,” he points out.

The increasing unrest brings to mind an ugly wildcat strike that took place at the facility in 2003. Unless conditions soon change, Horan says another strike is possible. In fact, a non-profit driver and owner/operator organization was recently formed with the goal of addressing these very issues, and it’s been soliciting members at and around CN’s Brampton intermodal yard.

Kassius Denizen is director of the recently formed Canadian Owner Operators Drivers Association (www.cooda.ca) and he says the organization already has more than 100 paid members. Membership’s not cheap either, with fees set at $75 per month for drivers and $100 per month for owner/operators.

“COODA is the only way we will get the changes and fair conditions we all want and deserve and that will only happen if we act as one strong group,” Denizen wrote in a recent communication to members. In an interview with Truck News, he admitted the organization’s second meeting drew a smaller audience than its first (which was attended by 170 drivers and owner/operators) and he acknowledged the group is experiencing some growing pains.

“There’s a lot of distrust,” he said of the industry. COODA is trying to differentiate itself from other associations by registering as a non-profit organization, Denizen says. He also vowed the group would keep its finances completely transparent.

“Our books are open so anyone can see what funds we have in our account,” he says. Still, the costly membership fees may deter some prospective members, especially those getting paid $35 per trip. But Denizen said the group is securing the service of a law firm that has had lots of success in tackling labour-related issues, and its services don’t come cheap.

“It is costly, but again, to get the kind of (law) firm that can make a difference, we have to go to the best and that costs money,” Denizen said. “Once the organization gets going and we have a strong membership, the lower the fees will be.”

Denizen himself is not a trucker. He runs a security company, but he says truckers approached him with complaints about their treatment at CN and since then “I have gone out there and met with truckers and the carriers and now I know more about the trucking industry than I ever thought I would.”

If the group does get up and running, CN wait times and the lack of driver amenities on-site will be its primary issue.

“With the number of trucks that are there, (having only a handful of portapotties) is almost inhumane,” Denizen says. “It’s inconceivable that they’d want human beings to sit there for five to seven hours with no bathroom facilities. And if you go someplace else (to use the facilities or buy food), you lose your place in line.”

Word of the new organization has been spreading among drivers, but Horan admits there’s still a lot of skepticism. And he has heard that some drivers have been threatened by their employers not to sign up. (With so much time spent waiting to be loaded and unloaded, drivers have had plenty of time to talk). “A lot of people want to strike but they’re afraid to,” Horan says.

RS Rush’s Basra, however, thinks some good could come of the new organization.

“I don’t think it’s going anywhere at this moment but if it does, it is for a good cause,” he says. “We need some sort of organization so we can do it legally and properly, not like in 2003.”

While truckers seem to be bracing themselves for potential labour action, CN itself has acknowledged the delays and says it is working to solve the problem.

“CN’s Brampton terminal has experienced an increase in traffic these past few days. We expect this to be a temporary condition,” Paquin told Truck Newsyesterday. “We expect the situation to return to normal in the next few days.”

He says CN is diverting some container traffic to its satellite yard in Mississauga to help reduce trucker wait times. Paquin said CN is not aware of COODA or any rumblings of labour action at its facilities.

“I can tell you that CN provides a point of contact for truckers in the event of specific issues,” he says.

There are many theories about what’s causing the slowdown at the intermodal terminal. Basra blames incompetence at CN.

“CN has their own internal problems…and I don’t think anybody should be penalized for that,” he says. “They’ve got to find solutions.”

Horan speculates that CN idled several of its cranes during the recession and has yet to put them back into service. And the cranes that are working, he says, are put to work unloading trains before loading trucks.

“We go in there in the morning and CN is unloading trains. There’ll be a dozen machines working and not one truck will get loaded,” he complains.

CN’s Paquin admits several cranes were placed out of service during the recession but he says new equipment will soon be up and running.

“CN manages its equipment and personnel levels based on the container volumes,” he says. “During the recession, CN disposed of then-surplus cranes. With the recent volume increases, CN has acquired equipment (including cranes) and is in the process of hiring and training staff to operate the
new equipment.”