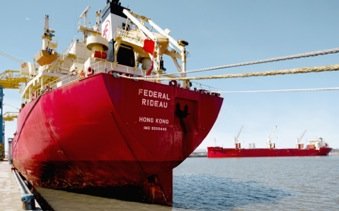 Sumitomo Corporation and Oshima Shipyard, which is located near Nagasaki, will build the 35,000-tonne bulk carriers. The ships are designed to navigate in icy waters and will be able to transit the St Lawrence Seaway.

In comparison with existing Fednav vessels, which were also built by Oshima, the new ships are designed to to consume 20 percent less fuel and produce 20 percent fewer emissions, including 20 percent less nitrogen oxide. They will be entitled to received the Clean-Design designation from Det Norske Veritas (DNV), and independent, 140-year-old maritime classification organization.

“The environment is one of our top priorities when we consider the design of a new vessel,” said Fednav president and co-CEO Paul Pathy. “It is very important to us and also to our customers that our vessels not only respect but exceed environmental regulations in Canada and worldwide.”

The ships are scheduled to be delivered between 2015 and 2016. The order is just part of Fednav’s growth plan which has seen 21 new ships added to the company’s fleet since January 1, 2012. Montreal-based Fednav, which handles both bulk and general cargo, describes its fleet as the largest fleet of ice-class vessels in the world. The company has offices in Europe, South America, Asia, Australia and North America.