by Inside Logistics Online Staff March 23, 2021

Container line Hapag-Lloyd this morning has warned customers that it may begin diverting vessels away from call at the Port of Montreal if the labour situation deteriorates.

In an email, the company said: “With the risk of potential industrial action at the Port of Montreal, we expect that terminal performance in the port will be severely impacted….As the situation develops, it may prove necessary to divert vessels…”

Hapag-Lloyd also notified shippers of the additional charges for moving  containers by rail to or from the alternate ports of call, Saint John, New Brunswick, or Halifax, Nova Scotia in the event of a diversion. 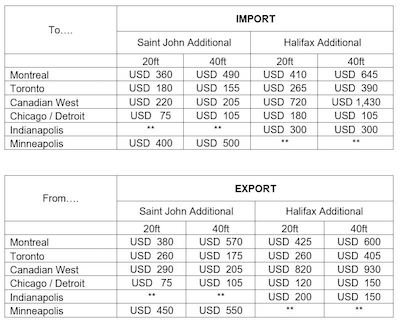 On the weekend, the Port of Montreal’s longshore union voted almost unanimously to reject the contract offer from the Maritime Employers Association. They stopped short, however, of sending a strike notice.

Other liner operators that call at Montreal have not issued warnings about potential disruptions. Maersk has a vessel scheduled to arrive on April 1. MSC also makes regular calls at Montreal and has not made a statement to customers.

The labour dispute has been ongoing since workers went on strike for 12 days in August 2020. A truce deal expired March 20, 2021.

During the work stoppage at least eight container ships were diverted to ports in Halifax, Saint John, N.B., and New York City, affecting thousands of importers and exporters and halting most of the 2,500 trucks that roll in and out of the port daily.

The longshore workers, who have been without a contract since September 2018, say the strike that began Aug. 10, 2020 revolved largely around wages and scheduling.