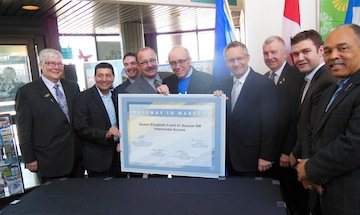 EDMONTON, Alberta—A major construction project designed to improve the flow of commercial traffic in Alberta has been officially begun.

Politicians representing the federal government, the province of Alberta and the city of Edmonton were joined by officials from CP at a signing ceremony to mark the start of the Queen Elizabeth II Highway and 41 Avenue South-West Access project. The $205 million project will upgrade the transportation network and facilitate the flow of commercial truck traffic into and out of CP’s new intermodal terminal.

When completed, there will be a new interchange that will rise above the Queen Elizabeth II highway (a major north-south highway in the region). The QE II highway will be realigned south of 41 Avenue SW to Ellerslie Road. There will also be a new bridge built over Blackmud Creek, improvements made to 41 Avenue SW, and a grade separation built over the CP mainline and future staging tracks. According to the Transport Canada, the highway and road improvements should reduce traffic congestion near the intermodal facility and make it quicker for trucks to enter and exit the CP property.

All three levels of government have committed funding to the project. The federal government is spending $75 million under the auspices of the Asia-Pacific Gateway and Corridor Initiative. Alberta is contributing $57.5 million and Edmonton has committed $72.5 million.

“From an Alberta perspective, we’re excited when we can collaborate with the other levels of government,” says Jeanna Friedley, a spokesperson for Alberta Transport.

“This is about getting goods to market, which is a core strategy for the province and for the country as a whole.”

She added that once the construction is complete there will be a major intermodal yard, an airport and a key provincial highway all within close proximity to another, which will be advantageous for businesses looking to move goods, and for city dwellers, as the facilities are located outside of residential areas.

The City of Edmonton is responsible for managing the project. Construction is expected to start this year and the project is scheduled for completion in 2016.

“The intermodal access project is a crucial addition to Edmonton’s transportation infrastructure,” said Stephen Mandel, mayor of Edmonton. “It provides an important link to the provincial transportation corridor and assists in the movement of people, goods and services throughout the Alberta Capital Region.”