by Inside Logistics Online Staff August 10, 2020 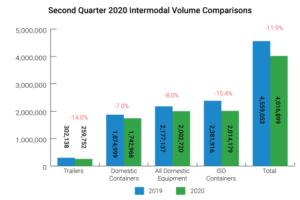 “Second quarter results showed the full impact of the economic downturn attributed to COVID-19. Slowing imports and declining diesel prices affected both international and domestic volumes,” said Joni Casey, president and CEO of IANA. “We anticipate that the Q2 drop-off should be a floor going forward.”

The seven highest-density trade corridors, which collectively handled more than 60 percent of total volume, were all down for the quarter.

The Midwest-Northwest and Intra-Southeast, at 19.1 percent and 17.6 percent, respectively, topped the losses. The South Central-Southwest came in at 14.6 percent; the Southeast-Southwest at 11.6 percent; and the Northeast-Midwest at 10.3 percent. Two corridors fell less than ten percent: the Trans-Canada declined 9.7 percent, and the Midwest-Southwest dropped 7.3 percent.

Total IMC (intermodal marketing company) volume fell 8.5 percent year-over-year in Q2. Highway loads were down 4.0 percent, while intermodal was 15.2 percent to the negative.