by Inside Logistics Online Staff February 1, 2022

Total intermodal volumes fell 9.8 percent year-over-year in the fourth quarter of 2021, according to the Intermodal Association of North America’s Intermodal Quarterly report. 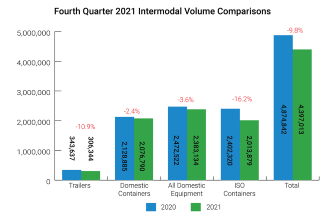 “Although Q4 volumes were down, intermodal loads grew during 2021, albeit at a much slower rate than the previous year,” said Joni Casey, president and CEO of IANA.

“Performance continues to be affected by the virus, as well as network congestion and the intermittent scarcity of equipment and labour.” 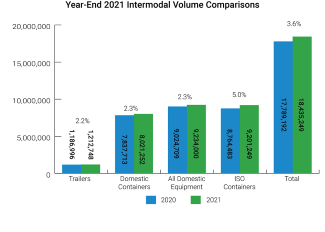 The seven highest-density trade corridors, which collectively handled more than 60 percent of total volume, were all down in the fourth quarter.

The Trans-Canada corridor, with a 21.0 percent deficit, led the losses, followed by the South Central-Southwest, Midwest-Southwest and Intra-Southeast at 14.7 percent, 13.3 percent and 11.1 percent, respectively.

The Southeast-Southwest dropped 9.9 percent; the Northeast-Midwest fell 3.8 percent, and the Midwest-Northwest held losses to 1.4 percent.