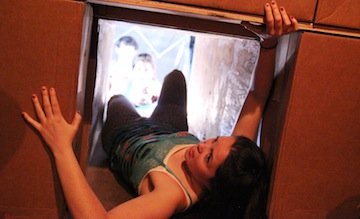 NEW YORK, New York—The air inside the theatre gets heavy. It gets hot, too, and the seats are not comfortable at all. By the time the show is over, you walk out thankful for a breeze and solid ground. That’s the point. The trailer being used as a theatre space.

The off-Broadway company Working Theater is presenting an immersive experience that’s as timely as it is powerful: Its play about immigrants sneaking across the border is being staged inside a 14.6m (48ft) cargo container.

Audiences at “La Ruta”—only 30 can fit per show—sit in the parked trailer on cardboard boxes as actors tell the story of a harrowing crossing for three people hidden in the freight trailer.

“At the end of the show, you are feeling slightly stifled—that is intentional,” says Mark Plesent, Working Theater’s producing artistic director. “It’s part of the experience—to really make people understand the trials and tribulations of people crossing the border.”

The idea of using a trailer was dreamed up by the playwright Ed Cardona Jr, who also works at the Columbia University School of Social Work. His other plays have explored the lives of people who live in America illegally.

“I felt an obligation to write something about the journey or the sacrifices and the risks these folks take just to get here,” he said. “The idea was to toss everybody into the trailer and to give the audience an immersive experience that they share together.” Crowds line up to enter the trailer.

Now in its 28th season, Working Theater is dedicated to producing plays for and about the working men and women of the city. It is putting on “La Ruta”—Spanish for “the road”—in collaboration with the Magnum Foundation, which supports the photography of social justice issues.

The 75-minute show, which also includes projections, sound effects and the feeling of motion, runs until May 12 and will have made stops in four of New York’s boroughs. The company hopes it might perform it one day in US border states.

The play comes as the topic of immigration reform is heating up in the US Senate, with new legislation being proposed that would dramatically remake how America treats the 11 million immigrants in the country illegally.

Working Theater commissioned “La Ruta” as part of a recent push to produce works that examine immigrants on the margins—people like domestic workers and those toiling in upstate poultry slaughterhouses.

“All of us, particularly in New York, rely on undocumented workers and we really never think about what it took for them to get here and what it meant for them to come here,” says Plesent. “I feel like they are the invisible workers in our lives.”

The theatrical work actually begins in a tent next to the trailer as patrons are told to sit and wait on pallets. The audience overhears the smugglers discuss the trip—it will involve other stops to pick up and drop off drugs—and then they are marched into the vehicle.

Three actors playing immigrants clamber into a small stage area in the back of the truck—a young woman fleeing Mexico, an older woman trying to get back to her family in Arkansas after being deported, and an ex-gang member from El Salvador. A low-level smuggler, jugs of water, a gun and a duffel bag full of drugs joins them.

“Next stop Dallas!” the audience is told and then the truck is locked. La Ruta cast during a performance.

The action switches from the front of the rig, where the driver and lead smuggler eat Twizzlers and debate the fate of their cargo, to the back, where the immigrants share their stories by flashlight. The story does not have a happy ending.

The vehicle—a real used cargo truck bought by Working Theater from an upstate warehouse—will be put in storage after it gets too hot this summer to perform the play. “I don’t want to sell it. I feel like we’ve done a lot of work on it,” says Plesent. “We made it into a theatre.”