Turning 60 and not about to retire 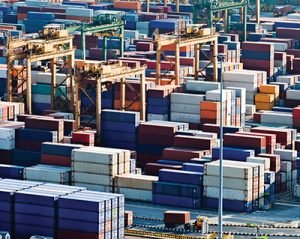 Container transport is widely viewed as an enabler of globalization

Sixty years later, the largest containerships can carry as many as 19,000 containers (twenty-foot equivalent units or TEUs).

Malcolm McLean was the pioneer behind this. He had successfully built a trucking business from scratch and was frustrated by the slow unloading of his trucks by the stevedores when he delivered cargo to ports. He rightly thought that it would be more efficient to use uniform containers and lift them on and off ships instead.

So he went on to acquire this World War II tanker—then called the Potrero Hills—had a metal top installed over the piping at Bethlehem Steel in Baltimore, Maryland, to enable the loading of containers on deck. The ship was rechristened the Ideal X and containerization was born.

MacLean then went on to create the ocean shipping line Sea-Land—recognized as the first container shipping company—which quickly became a market leader. Sea-Land subsequently introduced their first transatlantic container service in 1960. Many carriers followed suit and began offering container services as well, like Manchester Liners or United States Lines; names that have since disappeared.

As we saw, the first container-carrying ship was a converted tanker carrying boxes on deck, but carriers began outfitting break-bulk vessels to carry containers, some having their own cranes for loading and unloading.

At that time, containers were loaded mostly below deck, with some on deck. The eighties saw the beginning of fully-cellular containerships, built with a more square design in order to maximize their container-carrying capacity.

Today, containership design and the use of cell guides make it possible to load as many containers on deck as below deck. Modern containerships no longer have their own cranes, except some smaller vessels built specifically to operate in niche markets where smaller ports may not have the on-dock gantry cranes necessary to unload and load containers efficiently.

Uniform ocean container sizes were adopted early on (ISO norms), with a standard width of eight feet, but the original standard height of eight feet evolved to eight-feet, six-inches. As far as length is concerned, it is amusing to see that the original 35-foot length developed by Sea-Land was not adopted by other carriers; the standard instead became 20 feet and 40 feet. Using an awkward size of containers turned Sea-Land into somewhat of an oddball in the industry. Eventually, they lengthened many of their containers by five feet and adopted the same standards as the rest of the industry.

Standard “general-purpose’’ containers, as they are called, are 20- and 40-feet long, eight feet wide and eight-feet, six-inches high (outside dimensions). High cubes (nine-feet, six-inches in height) were later introduced to carry more bulky cargo. High cubes only exist in 40-foot length and there are no 20-foot high cubes.

Then the industry developed 45-foot-long containers, to accommodate light cargo (consumer goods) shipped out of Asia, but these are not used in all trade lanes. Specialized reefer containers accommodate cargo requiring temperature control and these will be covered in a separate article.

So these ocean containers come in specific, standard sizes, to enable efficient loading and unloading as well as intermodal transport. They come in different colours, usually identifying the shipping line. Not all containers are owned by shipping lines, though and many are supplied by leasing companies, who rent them to shipping lines that want to save capital costs, usually on long-term leases.

The identification of containers is also standardized, with four letters denoting the owner and the type, followed by a six-digit number and a seventh control digit. The tare weight, maximum gross weight and the safety plates follow international norms as well. So-called “grey’’ containers that could be freely interchanged between carriers (somewhat like the pallet-exchange programs many industries use) are discussed on a regular basis but this concept has not taken hold yet.

Going back to the early days of containerization, the name Sea-Land completely disappeared when it was bought by Maersk Line of Denmark in 1999. The new entity was called Maersk-Sealand for a while and subsequently renamed Maersk in 2006. Ironically, the name Sealand came back in January 2015, when the carrier decided to rebrand its intra-Americas services under the Sealand name. Sounds like “back-to-the-future’’ doesn’t it ?

Today, there are 6,121 ships carrying containers active on liner trades, of which 5,176 are fully cellular ships, with a total carrying capacity of 20,610,897 TEUs.

Container transport is widely recognized as an enabler of globalization. It increased the speed and efficiency of ocean shipping and drastically reduced losses caused by breakage and theft.

Among the various challenges faced by container carriers are the seasonality of the business, with peak periods ahead of holidays and low periods during and after holidays, and the never perfect and eternal balancing act between imports and exports that results in  the need to reposition empty equipment.

A bigger challenge faced by container lines today is that they build and operate bigger and bigger ships, but the promised economies of scale are not being fully realized. The main reasons are that the land infrastructure has difficulties keeping up with the flow of containers from the larger ships and even more importantly, the market is not growing as fast as the container-carrying fleet is. As a result, rate levels have been eroding and several carriers found themselves in the red.

But containers are so practical and we got so used to them that they are here to stay.