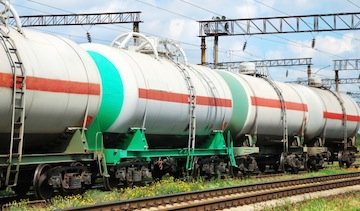 Critics say the government has stepped away from its responsbility to regulate rail safety (Photo: Thinkstock)

A whopping 28,000 percent increase in the amount of oil shipped by rail over the past five years is coming under the microscope following the deadly rail blast in Quebec.

Canada’s railways have made a determined push to cash in on the country’s crude-oil bonanza, painting themselves as a cost-effective alternative to politically unpopular pipelines like the proposed Keystone XL.

The Canadian Railway Association recently estimated that as many as 140,000 carloads of crude oil are expected to rattle over the nation’s tracks this year, up from only 500 carloads in 2009.

The eye-popping increase has gone largely unnoticed because public attention has been focused on the pipeline debates, said NDP energy critic Peter Julian.

Driven by the development of unconventional energy sources, the railway group expects a similar increase in traffic in the coming years, noting that as many as 600 barrels can be moved per carload.

“Railways have become a complementary option for moving crude to refineries located near tide water for access by ocean tankers [that] are not currently served by pipeline,” the railway association’s president, Michael Bourque, wrote in as recent online message, posted prior to the weekend tragedy.

He singled out the Irving refinery in New Brunswick as one example.

Now Irving Oil has confirmed in a statement that the fateful shipment of crude, which exploded Saturday, was bound for its New Brunswick refinery.

A rash of accidents and spills over the last year, in both Canada and the US, prompted Bourque to take aim at critics, who questioned safety, saying their remarks “are simply not true” and that railways deliver dangerous goods “99.9977 percent” of the time without incident.

The Quebec disaster is the fourth freight-train accident under investigation involving crude-oil shipments since the beginning of the year, according to the federal Transportation Safety Board.

The railway association, which dispatched its own dangerous-goods specialist teams to Quebec over the weekend, has aggressively touted the benefits of railways over pipelines.

It has reminded the business community and oil sector that, unlike pipelines, railways don’t come with burdensome long-term contracts, and noted that heavy crude also needs to be diluted when pushed through a pipeline.

The savings with train transportation can run as high as 30 percent per shipment, the association claims.

“This 30 percent difference in load factor is a key element in making rail a competitive option for transporting crude,” said Bourque’s statement, posted on the group website.

He also defended the safety of rail shipments.

“Some people have and no doubt will continue to come forward and make erroneous statements about the safety or environmental performance of railways, or pipelines for that matter, but the facts do not support them,” he wrote.

Yet there have been a number of high-profile accidents recently, including one late last month on a sagging bridge in flood-ravaged Calgary, Alberta. The derailed cars were able to be removed without spilling their cargo.

A month earlier, 91,000 litres of oil spilled from a CP Rail car near Jansen, Saskatchewan

Jean-Paul Lacoursiere, a chemical-engineering professor at Quebec’s University of Sherbrooke, said there are more variables to consider when using rail instead of pipelines.

“The state of the track, how well the equipment is maintained, mechanical errors—all these things need to be considered,” said Lacoursiere, an expert in the shipment of dangerous substances.

“It doesn’t mean we can use an old pipeline without assessment of the risks. But if you have a good pipeline, there’s less risk.”

In the Quebec case, the cause of the accident is believed to be a runaway train, according to the company involved.

The president and CEO of Rail World Inc, the parent company of Montreal, Maine & Atlantic Railway, said the train was parked uphill from Lac-Megantic before the incident.

The rail line was involved in another accident in the same area last month.

About 13,000 litres of diesel spilled from a train after it derailed in Frontenac, just east of Lac Megantic.

Greenpeace Canada said federal safety regulations haven’t kept up with the enormous growth in the shipment of oil by rail.

“Obviously this is a tragedy, but we also think it’s a scandal,” said Keith Stewart of Greenpeace Canada.

Stewart said the old tankers used by many trains are known to be unsafe.

“If you have a mix of older and newer ones, the older ones actually undermine the safety of the newer ones,” he said.

“They have different kinds of risk but they’re both risky and neither are as safe as they could be or should be.”

Julian said the Harper government has largely abandoned railway inspection, imposing as much as $3 million in cuts, and allowed the industry to monitor itself.

It’s not good enough for the association to claim that only a tiny fraction of the dangerous goods ever go off the rails, he added.

“When you talk to residents of places like Lac-Megantic, they would not accept anything less than the highest possible safety standards,” Julian said.

“It’s fair to say we’re not seeing the highest possible safety standards with the federal government. It is not playing the role it needs to play.”

When asked about rail-transportation issues during his visit to the town, prime minister Stephen Harper said it wasn’t the time to comment on causes.

“We don’t have a lot of the facts, and it would really not be responsible to comment without all the facts,” he said.

The prime minister said the Transportation Safety Board, and also the police, would be investigating. He promised to draw lessons from the conclusions to prevent a repeat of such a tragedy.

“We will conduct a very complete investigation,” he said, “and we will act on the recommendations.”

A spokesman for transport minister Denis Lebel denied that the government’s budget cutting exercise, either the strategic review or the deficit reduction action plan, has affected railway inspection.

“While increasing the number of front-line rail inspectors and auditors, Transport Canada has found administrative savings through the streamlining of information technology services and other efficiencies.”

The last budget has committed $72 million for regulatory development, oversight activities, and research and development, he added.

How that compares to previous government spending in past years is not entirely clear from documents tabled in Parliament.

However, Winterburn did say that companies are taking more responsibility “to create and maintain a culture of safety” and that the recently passed legislation includes tough new penalties for rule breakers.