Review set 325 conditions to protect the environment and human health

January 22, 2021
by Inside Logistics Online Staff

January 22, 2021
by Inside Logistics Online Staff 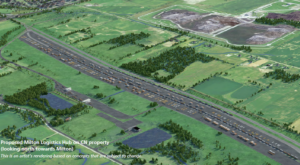 CN’s rendering of the proposed hub.

Canadian National Railway’s proposed Milton Logistics Hub has passed another development hurdle. The Government of Canada has approved the project, subject to 325 conditions set out in an environmental assessment decision.

The proposed intermodal hub includes a railway with more than 20 kilometres of track located in Milton, Ontario, approximately 50 kilometres west of Toronto on 400 acres of CN-owned land. It is planned to handle four intermodal trains per day. CN says one such train can transport the equivalent of 280 long-distance heavy trucks. As a result, the railway asserts the hub will reduce overall regional emissions for certain pollutants, including greenhouse gas emissions, by transitioning from trucks to lower-emitting rail shipments.

The hub was first proposed in March 2015. The $250 million project proposal was referred to an environmental assessment panel in July 2015, because of public concerns expressed about the development.

CN submitted its Environmental Impact Statement (EIS) at the beginning of 2016. The assessment asserted that terminal-generated traffic on neighbouring roads would increase less than three percent during peak hours. At the time, CN committed to continue working with the municipalities on its traffic planning efforts. The EIS also concluded that there would be no significant adverse residual environmental effects during all phases of the project.

The environmental impact assessment determined that the hub is likely to cause significant adverse project-related and cumulative environmental effects. Under the provisions of the Canadian Environmental Assessment Act, 2012, the government had to decide whether these effects are justified in the circumstances.

The government decided that the significant adverse environmental effects of the project are justified.

As a result, in his Environmental Assessment Decision Statement, Jonathan Wilkinson, Canada’s minister of environment and climate change, established 325 legally binding conditions on CN to protect the environment and human health. If CN goes ahead with the project, the conditions imposed would make it the most stringently regulated intermodal logistics hub in Canada, and among the most stringently regulated in North America.

The impact assessment limits truck traffic to 800 vehicles entering the site per day, averaged on a monthly basis.

Many of the additional conditions go beyond those initially proposed by the independent joint review panel. Forty specifically address air quality. The conditions include measures to address effects on air quality, human health, groundwater and surface water, migratory birds, species at risk, fish and fish habitat, the use of lands and resources by Indigenous peoples, and physical and cultural heritage.

CN will also be required to establish a community liaison and communication process. It will have to document and respond to feedback from the community, as well as demonstrate how this feedback is addressed. This includes liaising with potentially affected parties to identify and address potential impacts on traffic and road safety.

CN will have to comply with the conditions set out before and during construction, and over the course operations. Failure to meet these conditions is a violation of federal law. Any changes to the project will need ministerial approval through an amendment process.

In addition to the formal conditions, Environment and Climate Change Canada intends to work with the Government of Ontario to develop a regional air quality management strategy in the Greater Toronto Hamilton Area. It will address air pollution from sources in and around the region, many of which will remain whether or not CN goes ahead with the hub. Work on the strategy will take place over the next two years.