Seaway enjoyed strong results in 2018, with 41 million tonnes of cargo moving through its locks

March 28, 2019
by Inside Logistics Online Staff

March 28, 2019
by Inside Logistics Online Staff 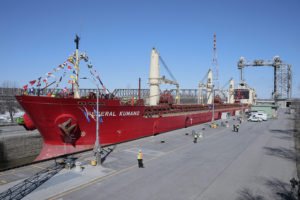 The Federal Kumano is the first ship through a Seaway lock for the 2019 season.

ST. LAMBERT, QC – The St. Lawrence Seaway Management Corporation marked its 60th anniversary with the opening of the 2019 navigation season.

The Federal Kumano served as the opening vessel, as the ship loaded with a bulk cargo of titanium chloride transited the St. Lambert Lock on its way to the Port of Ashtabula, Ohio.

Marc Garneau, minister of transport, and Québec’s minister for transport Chantal Rouleau were among a number of dignitaries that gathered at the St. Lambert Lock to celebrate the St. Lawrence Seaway’s 60th anniversary.

“The St. Lawrence Seaway has a distinguished past, a dynamic and vital present and will continue to play a pivotal role in Canada’s economy in the future,” Garneau said. “On behalf of the Government of Canada, I wish you a safe and successful navigation season.”

Terence Bowles, president and CEO of The St. Lawrence Seaway Management Corporation, praised Seaway employees for their role in implementing a Hands Free Mooring system and converting the Seaway’s locks to remote operation.

“Today, thanks to the many efforts of both past and present employees, we have a Seaway that offers carriers a more competitive route to the heartland of North America. With strong advancements in safety, reliability and efficiency, the Seaway is equipped to effectively serve its stakeholders for decades to come. A multi-billion dollar fleet renewal program being undertaken by Seaway carriers points to a bright future ahead for the waterway as it celebrates its 60th anniversary.”

The St. Lawrence Seaway Management Corporation was established in 1998 as a not-for-profit corporation by the Government of Canada, Seaway users and other key stakeholders. In accordance with provisions of the Canada Marine Act, the Corporation manages and operates the Canadian assets of the St. Lawrence Seaway, which remain the property of the Government of Canada, under a long-term agreement with Transport Canada.

The Great Lakes St. Lawrence Seaway System extends some 3,700 km from the Atlantic Ocean to the Great Lakes. Cargo moving on the system supports over 329,000 jobs and $59 billion in economic activity.

The binational St. Lawrence Seaway serves as the linchpin within the broader waterway, connecting the lower St. Lawrence River to the Great Lakes.  Beginning in Montreal and extending to points west, the Seaway’s 15 locks (13 Canadian and 2 U.S.) enable ships to climb a total of 168 metres from “sea level” up to Lake Erie. For more information on the St. Lawrence Seaway, see www.greatlakes-seaway.com.

Over the past 60 years, ships have transported almost 3 billion tonnes of cargo as they completed over 340,000 transits of Seaway locks.

Stakeholders within the System have been pioneers at advancing and developing new technologies that promote safety and environmental protection, including: