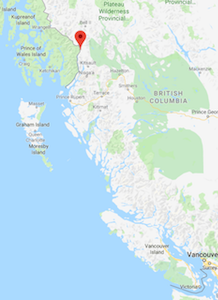 Stewart World Port is about 185 km north of Prince Rupert.

FORT ST. JOHN, BC – The federal government is assisting Stewart World Port with funding of $13.1 million for a capacity improvement project.

The project will increase capacity for export commodities such as bulk wood, mineral and agricultural products from Northern British Columbia, Yukon, Alberta and Saskatchewan. The project consists of installing bulk loading conveyor systems and power and control facilities at the Stewart World Port.

Located at Stewart, BC, on the Portland Canal, the port is on the BC-Alaska border and is served by Highway 37A. It is about 185 km north of Price Rupert, as the crow flies. It opened in 2015 and claims the title of the most northerly ice-free port in Canada.

The projects are expected to create an estimated 275 jobs in the region – which has a population of about 500 – during construction.

The company has also proposed a 220-km rail line to connect with the CN main line which connects Saskatchewan to Prince Rupert. Stewart World Port “believes there is an opportunity to ship grain from the Prairies” it says on its website. 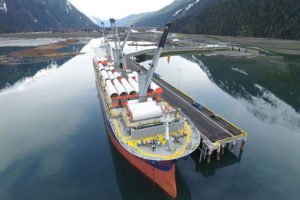 Stewart World Port and Canada Potash are collaborating on an engineering study. With the additional rail Stewart World Port will have the ability to export potash from Saskatchewan and import phosphate fertilizer.

Canadian Stewart Railway has applied for an investigative permit. High-level mapping of the 220km has been conducted and it is believed that the rail can be constructed in 2% grade or less.