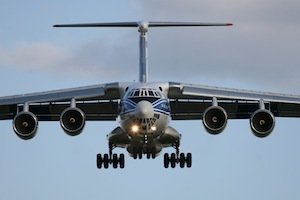 Volga-Dnepr Airlines completed another flight in support of the global relief effort to counter the outbreak of the Ebola disease by transporting medical equipment from Oslo, Norway to Freetown, Sierra Leone, on behalf of the Norwegian Red Cross.

The flight needed to be operated at short notice to deliver urgently needed equipment for a new Ebola Treatment Centre being set up in a remote region 350km from Freetown. Within 72 hours of the flight leaving Norway, the Norwegian Red Cross confirmed that the cargo had reached its final destination and was ready to provide much-needed assistance to combat the disease, which has already claimed some 8,000 lives in West Africa.

Volga-Dnepr’s load planning team was able to maximize the payload of the IL-76-TD-90VD flight within the constraints set by the airline’s flight safety department for operations to the region.

Over the past 25 years, Volga-Dnepr has played an important role in humanitarian projects all over the world, working on behalf of government departments and international relief agencies and charities. It completed its first flight to help with the international response to the Ebola outbreak in October when one of its An-124-100 freighters carried three multi-purpose Mi-8 helicopters from Moscow to Sierra Leone for the United Nations (UN) emergency health mission.

More recently, another An-124-100 freighter has operated to five cities in Congo, Ghana, Mali, Guinea-Bissau and Ivory Coast to deliver more urgent equipment. The flights to Kinshasa, Accra, Bamako, Bissau and Abidjan carried five 20-ton containers, part of the Chinese government’s programme to help countries in West Africa affected by the virus. The An-124 operated from Tianjin, China. The cargo included single-use protective suits, respirators, glasses, boot covers and other equipment used as part of the anti-epidemic measures being taken by healthcare workers operating in the worst affected areas.

Volga-Dnepr Airlines is operating in accordance with the recommendations of the UN Security Council that called on airlines and maritime companies to ensure transport connections with African countries suffering from the Ebola virus comply with special medical procedures.