February 12, 2020
by Inside Logistics Online Staff

February 12, 2020
by Inside Logistics Online Staff 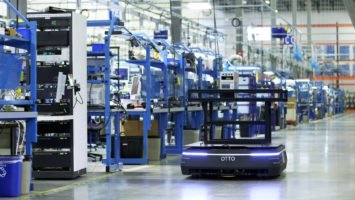 OTTO moves through a facility without infrastructure like magnetic strips or conveyors.

OTTO is partnering with Altech, a specialized trading company that imports advanced machinery and equipment from Europe and the United States to support Japanese industrial companies. The companies announced their partnership at RoboDEX2020, an annual robot development and application expo being held in Tokyo.

“Our self-driving vehicles have been helping modernize factories throughout the United States and Canada since 2015. OTTO Motors entered the Japan market in 2018, and with several successful deployments completed, we are expanding our efforts in Japan working alongside Altech.”

Together, OTTO Motors and Altech have already begun to serve customers in the automotive, logistics, food and industrial equipment industries.

One such customer is HIROTEC, a leading Tier 1 automotive parts supplier to Mazda. HIROTEC installed three OTTO self-driving vehicles within its Hiroshima plant to deliver Mazda door panels to welding cells as part of a mission-critical process.

This is the second deployment of OTTOs within HIROTEC, they were first deployed at HIROTEC AMERICAS in 2017 to automate spare parts production.

“Altech has a proud history of providing high-quality technology products and services to our customers,” said Hidehiko Suyama, executive director of Altech.

“Now, we are proud to be the first to bring OTTO Motors products to the Japanese market, where we know there is great demand across several industries.”

OTTO’s expansion in Japan and partnership with Altech come at an important time for the market. While there is a lot of attention on self-driving passenger vehicles, self-driving industrial vehicles, such as OTTO’s fleet of autonomous mobile robots and carts, are transforming material handling in numerous factories and warehouses.

The global market for mobile robotics is expected to exceed $224 billion by 2030, according to global technology market advisory firm ABI Research.

Demand in Japan will be particularly high because of the country’s demographic inversion. Having fewer young people than older people means that there is not enough labor supply to do all the work needed to power the economy. Japanese manufacturers must rely on self-driving vehicles and other forms of industrial automation because there simply are not enough humans to do all the work that needs to be done.