More than $1.49 million was raised and 238,393 pounds of food have been collected for local food banks

December 25, 2019
by Inside Logistics Online Staff

December 25, 2019
by Inside Logistics Online Staff 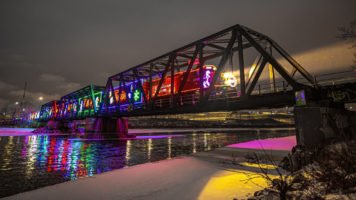 While final numbers are still being calculated, more than $1.49 million was raised and 238,393 pounds of food have been collected for local food banks and food shelves so far this year.

The Holiday Train has now raised more than $16.7 million and collected 4.7 million pounds of food since its inaugural journey back in 1999.

“For more than 20 years, we have brought the CP Holiday Train across North America delighting audiences of all ages,” said Keith Creel, CP president and CEO.

“Partnering with local food banks to raise awareness for hunger-related issues is the cornerstone that enables the success of the Holiday Train. Watching communities come out to celebrate and donate generously reminds us why the program continues to be so important.”

On the U.S. train, Alan Doyle and The Beautiful Band launched the season in Montreal, traveling throughout New York and southern Ontario.

Picking up the train in Chicago for the journey to Gleichen, Alta., the last show of this magical season, was Canadian Country Music Association (CCMA) Female Artist of the Year Meghan Patrick, along with Tanika Charles and Kelly Prescott. Vishten, an Acadian powerhouse trio, performed shows in French and English at stops in Quebec.

The musical artists that took the Canadian train from Montreal to Calgary included the talented Madeline Merlo, a CCMA Award-winning artist, alongside Scott Helman, a 2018 JUNO Award nominee for Songwriter of the Year.

Three-time JUNO Award-winner Terri Clark took over the helm with Dallas Smith, 2019 CCMA Awards Entertainer of the Year, from southern Alberta to the final stop in Port Coquitlam, B.C.

The CP Holiday Train program is not the only way CP gives back to food banks. CP also provides Food Banks Canada $250,000 worth of in-kind transportation services to support its National Food Sharing Service program.

“On a personal note, I can’t express how much I enjoy seeing the Holiday Train coming down the tracks, all lit up and decorated for the holidays!”