by Inside Logistics Online Staff June 5, 2020 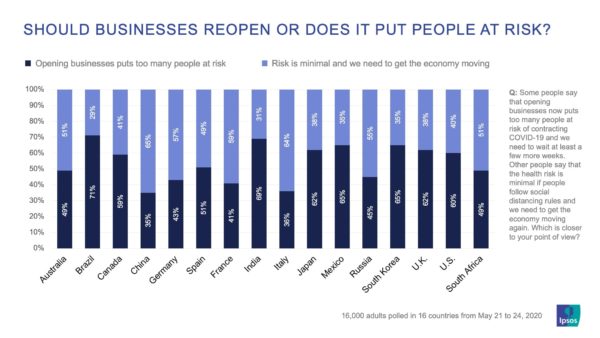 A majority of Canadians believe opening businesses now puts too many people at risk of contracting Covid-19.

In the latest survey from Ipsos, conducted from May 21 to 24, among 16,000 people in 16 major countries, 59 percent of Canadian joined many from other countries in saying it’s too soon too open. People in Brazil (71 percent), India (69 percent), Mexico and South Korea (65 percent), Japan and the United Kingdom (62 percent) and the United States (60 percent) are most likely to say we need to wait at least a few more weeks before opening businesses, because opening now would put too many people at risk of contracting COVID-19.

But on the opposite end, those in hard hit countries of China (65 percent), Italy (64 percent), France (59 percent), Germany (57 percent) and Russia (55 percent) are most likely to say the health risk is minimal if people follow social distancing rules, and we need to get the economy moving again.

People most divided on taking this action are in Spain, Australia and South Africa with only two percentage points between those who think opening businesses now puts too many people at risk versus those who say the risk is minimal. 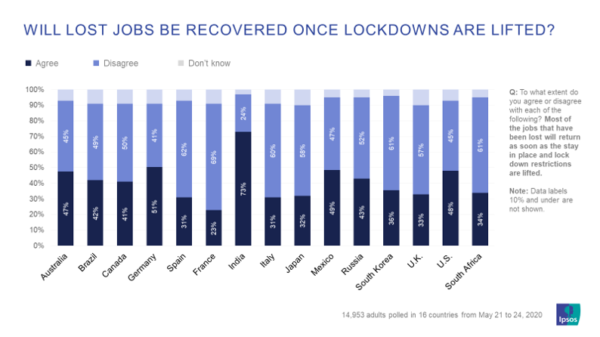 Added to this, half of Canadians, along with a majority of people in France (69 percent), Spain (62 percent), South Korea and South Africa (61 percent), Italy (60 percent), Japan (58 percent), the U.K. (57 percent), and Russia (52 percent) don’t think most jobs lost during the pandemic will return as soon as the stay in place and lockdown restrictions are lifted.

A majority of respondents in India (73 percent) and Germany (51 percent) are the only ones out of 15 countries to believe most lost jobs will return once restrictions are eased.

These are the results from Ipsos Essentials, a weekly global syndicated study examining opinions and behaviours as countries move through the pandemic. These results were collected May 21st to 24th, 2020 using an online methodology 16,000 adults aged 18-74 in Canada and the United States and 16-74 in Australia, Brazil, China, France, Germany, Italy, Spain, India, Japan, Mexico, Russia, South Africa, South Korea and the United Kingdom.

The sample for this study consists of approximately 1,000 individuals in each country. The samples in Australia, Canada, France, Germany, Italy, Spain, Japan, South Korea, the U.K. and the U.S. can be taken as representative of these countries’ general adult population over age 16 or 18 (as above) and under the age of 75. The sample in Brazil, China, India, Mexico, Russia, and South Africa is more urban, more educated and/or more affluent than the general population and should be viewed as reflecting the views of the more “connected” segment of the population. The data is weighted so that each market’s sample composition best reflects the demographic profile of the adult population according to the most recent census data.

Where results do not sum up to 100 or the ‘difference’ appears to be +/-1 more/less than the actual, this may be due to rounding, multiple responses or the exclusion of don’t knows or not stated responses. The precision of Ipsos online polls is calculated using a credibility interval with a poll of 1,000 accurate to +/- 3.5 percentage points.