Shandex adapts to its changing business with a flexible WMS 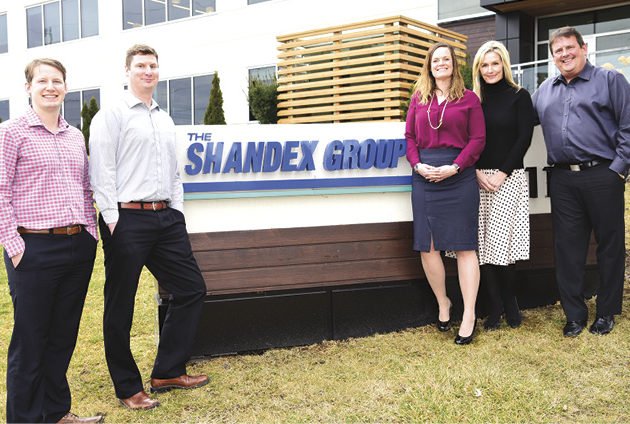 When your warehouse staff are trying to find inventory using opera glasses to scan the upper racking levels for labels on boxes, you know something has to change. That’s the predicament the Shandex Group was experiencing in 2009.

The company is a diversified third-party logistics provider with a transportation arm and light manufacturing capabilities, based in Pickering, Ontario. Founded in 1987, the family-run business develops private label consumer goods and operates four distribution centres, fulfilling both store and, increasingly, e-commerce orders.

“We literally came to gridlock in the warehouse,” said Claire Griffin, Shandex’s director of operations. “If you rely on people to drive where products go, that works initially when you have copious amounts of space.”

“We hit a wall where people can only take you so far,” confirmed James Lambert, the company’s director, systems and development. “They’re doing the best they can. But, as we grew, people trying to locate boxes in a warehouse when they’re all brown, all have a white label on them and trying to read them was a challenge.”

The company also has Health Canada certifications, which require tracking expiry dates and lot numbers, adding to the manual workload. “A lot of our labour was just trying to transcribe what people had written into a spreadsheet so you could add it all up,” Lambert continued. 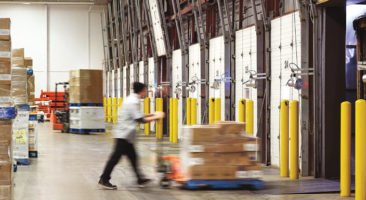 Keeping things moving – the WMS has allowed Shandex to grow along with customer requirements.

“As soon as you have the constraint of space, you need some kind of system or algorithm to keep the flow moving,” Griffin said.

At this point the company decided it was time to automate inventory control in its distribution centres to “look at zoning and put away…to take that decision process away from the material handler and allow the system to drive it,” she added.

An RFP netted a proposal from Mississauga, Ontario-based Automation Associates, which was the ultimate winner after all the contenders were reviewed in a process of site visits and interviews.

“They really wanted to understand our business and really understand how their system could handle our business,” said Griffin. “For us a big piece was also that they were local and Canadian.”

Once the vendor was chosen the company moved ahead with an aggressive three-month implementation plan, with the objective of having the WMS in place before their annual inventory count would need to be done. “I was going to quit if we had to count on paper one more time,” Lambert laughs.

Although Automation Associates counseled a six-month implementation plan, they “rose to the occasion”, Griffin said. In fact, things went so well that by the end of the go-live day, April 1, 2009, a plan to run a parallel paper-based system for a transitional month was completely abandoned.

“We were very confident that all of our orders were being processed and recorded properly, which is what you need to be able to ship an invoice,” Lambert said. “So, we didn’t feel like things were going to a black hole and disappearing. We could see everything.”

Griffin concurred: “We could see how complicated it was going to be,” Griffin said. “Our team picked up really well in terms of using the [RF] guns. Acceptance of the system was higher than we initially expected.” 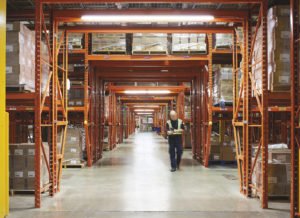 The WMS means no more hunting for labels in the warehouse.

Now that the system has been in place for 10 years, the Shandex Group has experienced tangible benefits. Employee training is streamlined and productivity has soared.

Joe Shannon, now the company’s operations manager, started in the warehouse in February 2009, using the manual system. “I became a much more effective employee after the system was implemented because it evened the playing field. You had to spend years to become a really good picker beforehand,” he said.

Previously, 40 orders would be a big day for the DC, with an average of about 25 to 30 orders. Now, an average day, including e-commerce, would be 200.

And the composition of orders has changed over the years, making the process considerably more complex. E-commerce, for example, has meant the addition of serial numbers in the system, in which previously the smallest unit would have been a case.

But the WMS has streamlined the process, making the higher volume possible. Where before orders would come down on paper and a picker would “have to look through the order tray and go, oh, this is a three pager and this is a two pager,” now the whole thing is summarized in the system, Shannon said.

The biggest gain, according to Griffin, is the ability to grow. The WMS “had given us efficiency gains so that we were comfortably able to grow and expand.” And even after a few years when client requests began to really push the system’s limits, the Shandex team was able to sit down with Automation Associates to work out how to make adjustments to fit the new requirements.

“Until about five or six years ago, we weren’t utilizing the full capability,” Shannon said. “Then we really focused on diving in, using all the back tables to drive efficiency through the system. And that really changed the way we put away and organize our warehouse and drive efficiency. Now, we’re at the point where we are making more continuous improvement changes.”

For example, “a client wants to track two different lot numbers instead of one, so they invent a field and a process for that. And then, another customer or client needs to trigger things for best before dates, or special needs on other ones,” Lambert said. “A lot of the time there was something in the system that was almost there but needed to be taken one or two steps further. And we would come up with our scheme to do that. And Automation Associates would sit down with us and talk through how to make it a reality.”

Another advantage of the WMS has been the ability to flex space up and down as need required. Since the system was adopted the company has opened and closed numerous off-site warehouse facilities that it has managed from the main Pickering installation. “We like to grow conservatively,” Griffin said. “WMS has given us that flexibility. If we need to lease space as we prepare to grow for the next step of taking on a new facility or purchasing a new facility, we can bring up a temporary site for nine months.”

Previously, satellite sites were a challenge with paperwork needing to be physically moved there from head office, resulting in slowdowns in order processing and invoicing. The WMS really improved the company’s cash flow, Griffin said, and was instrumental in gaining senior management buy-in.

The team at Shandex is also very happy with the WMS’s ability to deliver the kind of data that customers now routinely request. “Information is what everyone wants right now,” Lambert said. “Before, the order had shipping to this place, this SKU, this quantity. Now there’s tracking numbers, lot numbers, expiration dates, another SKU number, this SKU number, all this extra information. We are continually adding more information into these smaller and smaller orders for more and more clients. But you can see the benefits of that with the end analysis that can be done and all the extra information that’s there.”

Likewise, the WMS seamlessly communicates with customers’ enterprise systems as well as a newly implemented in-house TMS. This is key for the company’s relatively new role fulfilling e-commerce orders for clients. “Because we’re fully integrated with our clients, orders actually integrate into our WMS. They don’t have to change anything on their front end because they’re using their own independent platforms,” Griffin said.

Looking five years down the road Shandex expects the WMS to continue supporting its growth. Lambert noted that the priorities are to get better at the consumer goods business, e-commerce and the Health Canada certified business.

For e-commerce, which is growing quickly, “the challenge for us is the system side, which is where we depend on RF Pathways and James’s team to figure out how to process the order faster. Because, if we can get the tracking number to the customer at the point of purchase when they click, that takes the anxiety off the consumer and then we’ve got time to pick and ship the order and get it out,” Griffin said.

Likewise, the 3PL counts on the automation to help it be as flexible as its clients require. “We never want to tell a client, “No, we don’t have the space,” she added. “And at the same time we don’t want to get to a gridlock position. We count on that flexibility to let us constantly adjust and accommodate.”

The bottom line, Griffin said, is “we haven’t lost sight of our grassroots, but it’s also allowed us to really expand and grow as a company in a healthy manner.”