Both sides of the fence

Bob Ballantyne reflects on his 60 years in Canadian supply chain 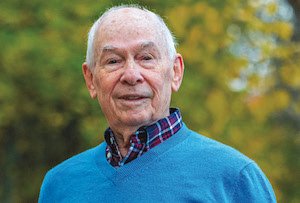 There aren’t many in the Canadian transportation and logistics world who can boast a 60-year career in the industry.

But many of us know one who can, and he is honoured this year with one of this country’s top supply chain recognitions: Bob Ballantyne is the Freight Management Association (FMA) Supply Chain Executive of the Year.

“Bob has demonstrated a long-term commitment and sustained leadership in the transportation and logistics industry in Canada throughout his long career,” said Gary Fast, vice-president transportation for Canadian Tire, and FMA chairman. “The board felt that there is not a more worthy recipient of the 2020 Supply Chain Executive of the Year than Bob, in recognition and in honour of his achievements. Bob’s encyclopedic knowledge of the transportation industry, his reputation, and his ability to work with diverse groups are respected in the transportation community, both in Canada and around the world.”

While Ballantyne will be stepping down from his role as president of the FMA at the end of 2020, he plans to continue working with incoming president John Corey, and Cindy Hick, FMA’s vice-president, to promote the interests of Canadian shippers.

While we couldn’t sit down with Bob owing to the pandemic, he shared the highlights of his long career with Inside Logistics editor, Emily Atkins, over the phone.

As a freshly graduated civil engineer coming out of the University of Toronto in 1960, Ballantyne took a job with Canadian Pacific Railway in the engineering department. Starting in track engineering and signal engineering, he moved on to operations, and then marketing and sales. In the early 1980s he was promoted to vice-president at Canadian Pacific’s newly established consulting company. As a CP employee, Ballantyne was also president of the Railway Association of Canada from 1988 to 2000, which is when he retired from the railway. In 2002 he took over management of the FMA.

“It’s been a really interesting career,” Ballantyne says. Taking over the association was “certainly a chance to have a look at the whole logistics of supply chain industries from a very different perspective, because all my time at CP, of course, was from a carrier perspective and since then, it’s been from a shipper perspective.”

“All that time in the railway gave me insight into the way that the railways perceive the world and look at it and deal with all their stakeholders, their employees, their shareholders, and their customers. So to have that background and take that over to the side of the shippers, I think was really quite useful. I would say when it was first announced that I was going to become president of FMA, all my old railway friends said, ‘You’ve gone over to the dark side’.”

He believes that this both-sides-of-the-fence career is a good part of the reason for the Supply Chain Executive of the Year recognition: “It’s probably because of the varied and long-term time I’ve had in the industry, and a lot of very interesting issues that we dealt with at the Freight Management Association over the last approximately 20 years, both on the government-relations side and to some extent on the carrier-relations side, as well.”

Highlights of his career at CP included working overseas for the consulting division. He recalls projects in Costa Rica, China and Australia, working to rehabilitate railways and assessing capacity for bulk transport of minerals.

“I had the opportunity to develop this computer model with a bunch of other people in the early ’60s,” Ballantyne recounts. “It was modeling a human reaction under fairly strict rules to the way a train dispatcher would actually make his moves in setting which trains to go into sidings and that kind of thing. All the input was done by punch cards, and all the output was done on a continuous sheet.

“Given the early stage of computer and data processing, that was a really interesting project. It was used as a planning tool for the installation of a centralized traffic control signal system. The early ’60s was a time when that was happening across the main lines of most railways in North America.”

Looking back on his time with FMA, Ballantyne points to achievements in improving carrier-shipper relations, particularly between the railways and their customers. “It can be a tense relationship, just because it’s not a normally functioning competitive market with only two suppliers,” he notes. “A lot of the work that we’ve done in that area, primarily with the government and with some of the changes to the Canada Transportation Act that relate to the railway-shipper relationship, have been some of the big things that have happened over the last 20 years. There have been some changes to the Canada Transportation Act that we think have been very useful to the shipper community and the relationship with the railways.”

Ballantyne was also instrumental in establishing the Coalition of Rail Shippers, a group of 18 industry associations whose member companies represent a major segment of Class 1 railways’ customer base.

His work is not confined to Canada’s borders. He also represents Canada’s shippers on the board of directors of the Global Shippers Forum (GSF), and he was elected the GSF’s inaugural chairman when it was incorporated in 2011.

State of the industry

As he steps away from his full-time role at FMA, Ballantyne has time to consider the current and future state of supply chains and shipper-carrier relations.

The pandemic has brought questions of nearshoring to the fore, he notes. And although there has yet to be much evidence of this happening on a significant scale, “if it did it could have a significant impact in terms of investments in infrastructure such as ports and terminals, as well as the obvious effects on global carriers.”

On the trucking side, he expects the discussion of driver shortages to continue, while for rail he notes that the ongoing prospect of labour disruptions is one area the FMA will continue to watch closely.

Rail aside, Ballantyne believes the “relationship between shippers and carriers in the other modes, certainly trucking and air, is probably pretty good. Again, there’s ups and downs there, too, depending on if there are capacity constraints, then the carriers in those modes will raise their rates. So there’s up-and-down relationships related to both capacity and pricing as there are in most markets.”

Relations between marine carriers and their customers “have probably become more difficult over the last 20 years as there has been some consolidation in the container-marine-carrier market, and the continuation that the international marine carriers under Canadian law, and under U.S. laws as well, still have some exemptions from competition law.”

He notes the spike in blank sailings since the pandemic began and the consequent rise in rates. “We do hear stories to some extent that even shippers who’ve got contracts with the big ocean carriers have had some problems with the shipping line [respecting] the contract rates…It’s probably causing some strain.”

Getting to rail, Ballantyne believes the underlying issues have not fundamentally shifted. “Canadian railway law, and the way that Canadian railway law has been written for over 100 years, recognizes that rail is not a normally functioning, competitive market because there has always been some constraint on railway activity,” he says. “Since the pandemic hit, in some parts of the country the railways have taken necessary steps to reduce service where demand was reduced, but in some cases, they reduced service where demand wasn’t reduced. And I think that’s been a bit of a problem. However, I suspect that just the nature of the business, again, with only two suppliers and such a major activity, that the relations between shippers and the rail carriers will always have a bit of tension.”

Ballantyne credits luck, good health and curiosity for his long career. “In terms of luck, you have to have good health. You have to have an interest in what you do. I’ve always been fascinated by transportation. In the whole 60 years, I learned something new almost every day. One of the other reasons I kept doing it, even after my 40 years at CP, is that it keeps my brain active,” he says.

But he also points out the importance of personal relationships. “The other thing is the relationships that I’ve had with people over all these decades has also been a real joy.” He and Cindy Hick, who he has worked with for 40 years, and her husband get together regularly to ride their bikes on the old CP Rail line that runs between Ottawa and Carleton Place. “I actually rode over that same territory on trains when I was in the early days at Canadian Pacific. So that keeps me active, and that’s another throwback to my railway time, the fact that I’m biking now on an abandoned CPR railway.”

Ballantyne doesn’t plan on quitting the FMA any more than he will stop riding. He will continue on in a supportive role, offering to continue assisting with member communications as well as working within the management company – HPB Association Management Services – that he, Hick and Vancouver-based lawyer Forrest Hume run together.

“Transportation is of fundamental importance to the Canadian economy and working in the supply chain industry for many decades has been a satisfying and rewarding career,” Ballantyne concludes. “It is an honour to have been named the 2020 Supply Chain Executive of the Year, and my thanks to the FMA board of directors and my colleagues, Cindy Hick, Forrest Hume, and John Corey, for their support over many years.”