February 21, 2019
by Inside Logistics Online Staff

February 21, 2019
by Inside Logistics Online Staff 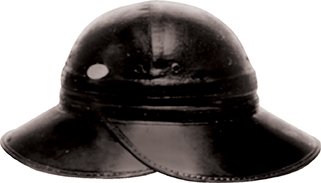 From canvas to aluminum to ﬁbreglass and now resin, the hard hat is has become a ubiquitous piece of personal protective gear worn in many industries. And while there are now numerous manufacturers of hard hats, providing plenty of choices for different applications, it wasn’t always this way. At the turn of the 20th century construction workers, miners and others had few options to protect their heads from concussions or other injuries.

It was 100 years ago that the founder of a company supplying carbide lamps and other mining equipment to gold and copper miners, the E.D. Bullard Company (founded in 1898 in San Francisco and now known simply as Bullard) was inspired to create the ﬁrst protective headgear for miners. Today the company is celebrating 100 years hard-hat innovation.

“The miners used to wear a soft derby, similar to a baseball cap. It had a small, hard-leather and shellac brim,” said Edward D. “Jed” Bullard, chairman of the board and former president and CEO.

In 1915, E.W. Bullard, son of founder Edward Dickinson Bullard, returned home from World War I with a steel ‘doughboy’ helmet he had worn. It inspired the creation of a helmet to better protect miners from falling objects. It became the original hard hat, known as the ‘Hard Boiled Hat’, patented in 1919.

The hat was manufactured out of steamed canvas, glue, a leather brim, and black paint. The term ‘hard boiled’ was applied because of the steaming process.

Also in 1919, Bullard was commissioned to create a helmet for U.S. Navy shipyard workers, and around that time added a suspension system that cushioned a blow and distributed its force around the head.

The ﬁrst designated “Hard Hat Area” in the U.S. was set up at the San Francisco Golden Gate Bridge construction site in 1933. “The project’s chief engineer, Joseph B. Strauss, shared a vision with my grandfather that the workplace could be a safer environment for the worker. One problem the bridge project faced was falling rivets, which could cause serious injury,” Bullard said.

“My grandfather transformed the mining helmet into a durable industrial hard hat.”

In 1938, Bullard designed and manufactured the ﬁrst aluminum hard hat, which was considered very durable and reasonably lightweight for the time. “Even today, a few clients still have their old aluminum hard hat,” said Bullard. However, “these hats have one serious drawback, aluminum is a great conductor of electricity.”

Bullard’s distinctive three-rib, heat resistant, ﬁberglass hard hat was developed in the 1940s. In the 1950s and 1960s, thermoplastics replaced ﬁberglass because the newer material was less costly and better suited for the applications. Bullard, along with manufacturers like MSA, began to make injection molded thermoplastic hard hats.

In 1982, the standard hard hat changed again. The director of safety at Bechtel Corporation, one of Bullard’s major clients, felt that hard hats didn’t have the proper suspension for ﬁeldwork. In response, Bullard introduced a new helmet that incorporated a non-slip ratchet suspension with a knob in the back for simple sizing.

Since the 1980s hard hats have come a long way. Now they are usually made of HDPE (high-density polyethylene) and offer many styles and add-ons to suit different applications. Hats now come with options like visors, sun protection, hearing protection, rear-view mirrors, two-way communications and headlamps.
While Bullard no longer has a headlock on the market, the company continues to innovate to stay competitive. Unprecedented changes have occurred in the last ten years.

“A great deal of our knowledge comes from designing ﬁreﬁghter helmets,” said Bullard. “We’ve been able to apply research on applied energy absorption to the industrial setting.” As a result the company now makes lightweight ﬁreﬁghter helmets that, at 709g, are half the weight of conventional ﬁreﬁghter helmets and weigh the same as many climbing helmets.

“We are proud of the role Bullard has played in revolutionizing the safety industry,” said the company’s CEO, Wells Bullard. “Our vision to advance human safety to enable long, healthy, productive lives through innovative solutions is our commitment to every customer who chooses a Bullard product. A huge thank you to our most valued customers, employees, distributors, and suppliers for supporting us throughout the years and in the future.”