Union tells workers to get the jab 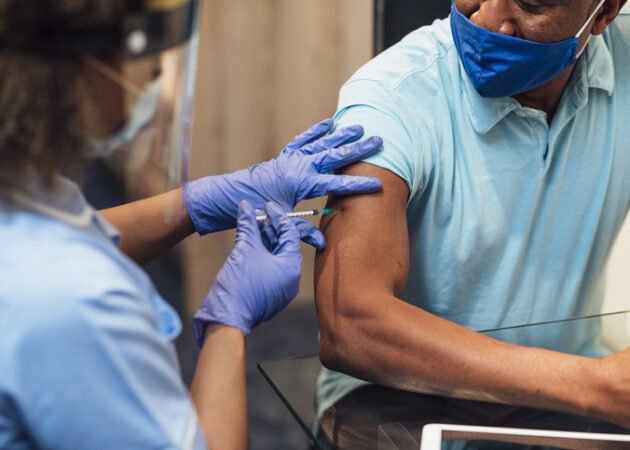 The head of Canada’s largest private sector labour union has a blunt message for Unifor staff: Get vaccinated or find another job.

The union recently advised its 425 staff members that they will be placed on an unpaid leave of absence until they get vaccinated against Covid-19.

“And if they don’t get vaccinated within a reasonable period of time, well then that’s fine,” said Jerry Dias. “They can work for another organization. I’m not messing around with this.”

Dias also has a warning for Unifor members who are holding out against being vaccinated, saying they could end up losing their jobs if their employer adopts a vaccine mandate.

“If people are terminated because they make the decision that they’re not going to be vaccinated, then our lawyers are saying to us that they will stay terminated,” Dias said in an interview.

The growing number of vaccine mandates in the public and private sectors have exposed a fault line in Canada’s labour movement.

Canadian National Railway Co. and WestJet Airlines are among the latest large employers to announce their vaccination policies, following an Aug. 13 directive from Ottawa that requires all employees in federally regulated industries to be vaccinated.

Both railways and airlines are members of that group, which also includes banks, telecommunications companies and employees of Crown corporations.

Montreal-based CN will require all employees in Canada, contractors, consultants, agents, suppliers and anyone who accesses its Canadian properties to be vaccinated as of Nov. 1. It said requests for medical or religious exemptions will be considered on an individual basis.

Calgary-based WestJet’s mandate is effective Oct. 30. The airline said it will accommodate employees who are unable to be vaccinated but those who fail to attest their vaccination status by Sept. 24 or achieve full-vaccination status by Oct. 30 will face unpaid leave or termination.

Like Air Canada, WestJet is not providing Covid-19 testing as an alternative to vaccination.

Unifor’s executive committee voted unanimously to support vaccine mandates, and Ontario unions for elementary and secondary teachers have voiced their support for mandatory vaccinations in schools.

A pro-mandate position in the context of a pandemic is not surprising given the union’s duty to protect the health and safety of its members, says Alison Braley-Rattai, assistant professor of labour studies at Brock University.

“In a different context, however, that could change,” she wrote in an email.

“For example, if your employer wanted you to be vaccinated against some non-transmissible disease to reduce the risk of you being absent from work due to illness, a union would likely oppose such a policy.”

Whether employees should face job loss is also an open question given that we don’t know how things will look a year from now, she said.

“A union could readily argue that termination is an extreme response to a mandate that may end up being temporary, and that the worst thing one should face is a temporary unpaid leave.”

Unions opposed to vaccine mandates include the Toronto Police Association and the Amalgamated Transit Union Local 113, which represents public transit workers in Toronto and the York Region.

Police association president Jon Reid said it will “make every effort to protect all of our members and therefore, does not support this mandatory vaccination announcement or mandatory disclosure.”

The union has urged members not to disclose any private medical information to the country’s largest transit authority.

“ATU Local 113 opposes this policy, and we will fight to defend your right to make your own personal health decisions and protect your private medical information,” Santos said in a letter to members on the union’s website.

Santos added that the union will oppose any discipline imposed on members.

However, Dias said the labour movement should be candid with people about whether unions can actually block terminations.

“I think there’s a lot of unions out there that frankly don’t have the political will to be honest,” he said, adding that the union isn’t obligated to take a case to arbitration.

“According to our lawyers, if they are fired for refusing to take a vaccine and they don’t have a bona fide medical reason to do so that an arbitrator will very likely side with the employer.”

While the Canadian Labour Congress supports vaccinations, it says the country’s unions are concerned that mandatory vaccinations will hand employers overreaching powers.

“Any decision to impose mandatory vaccination policies must be based on scientific evidence and be made by public health officials, not employers or unions,” it stated in a news release.

It said unions must be consulted in the development and implementation of any mandatory vaccination policies with exemptions and accommodations and privacy protections being essential.

The central labour body in Canada said it rejects threats of discipline or termination as an approach to increasing vaccination rates.

“Unions will defend workers’ interests and insist employers respect the terms and conditions of the collective agreement and human rights codes.”

The Canadian Union of Public Employees says governments and employers need to consult with unions before finalizing and implementing vaccine policies. It also says workers who cannot be vaccinated for medical or religious reasons must be accommodated under human rights legislation.

“As a union, we recognize our obligation to those members who are not vaccinated,” it stated, adding that alternate work arrangements, screening and testing before entering the workplace can be effective.

Public Service Alliance of Canada national president Chris Aylward said it supports the government’s goals but the verification of vaccination or medical status of members must respect their legal right to privacy.

The International Association of Machinists and Aerospace Workers (IAMAW) said it categorically reject terminations and discipline as leverage to increase vaccination rates.

“Punitive policies are not conducive for a positive workplace and a healthy relationship with employees.”

Teamsters Canada questioned the urgency of the government’s push for a vaccine mandate given alternative ways to encourage vaccination.

“Canada already has one of the world’s best vaccination programs, and other measures like provincial vaccine passport systems had promising potential.”