Decline of bridges has reached the point where the government might consider closing smaller crossings. 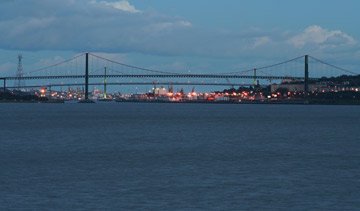 HALIFAX, NS—Nova Scotia’s bridges are corroding and crumbling to the point where 391 of those inspected were listed as having serious damage including missing concrete, says a provincial database.

Chief highway engineer Bruce Fitzner says the decline of bridges has reached the point where the government might consider closing smaller crossings that aren’t frequently used.

Using the freedom-of-information law, The Canadian Press obtained 3,021 inspection reports done on bridges in 2012, the last year where records are complete.

An analysis of the data from those reports shows 13 percent of the bridges inspected were in poor or worse shape. The database is based on preliminary and advanced inspections of the bridges.

Bridges in poor condition were those that had advanced section loss, pieces of concrete falling off and structure that was worn away by water and sediment, the database says. Those considered in serious shape—a worse ranking than poor—had various forms of erosion and crumbling that affected primary structural components.

Fitzner said smaller bridges could be closed by the Transportation Department. “We talk about the long-term deficit. It has to be addressed at some point or infrastructure comes out of service,” he said in an interview.

The percentage of bridges in poor or worse condition grew gradually from just under 11 percent in 2010, while those listed in good or better shape fell from 54.6 percent to 53.3 percent over three years, the database says.

Just under half of the province’s 4,310 bridges are more than 50 years old, Fitzner said.

He said the bridges remain safe, in part because when they are too deteriorated they are either closed or a new maximum weight is posted. Fifty-three bridges are on a five-year replacement or repair list, he added.

The database does not say how many bridges have been closed.

Fitzner said tight budgets mean many of those listed as poor or worse will have to wait for repairs as the province’s salty air takes its toll.

“You start losing the metal to oxidation,” he said. “If you have a very rigorous painting program you keep that section loss from happening, and in a lot of cases we aren’t doing that as much as we should be doing it.”

Partial results released for last year show that 3,950 bridge inspection reports were done, but 527 of those are incomplete, the database says. Of those that are complete, 344 were ranked poor or worse.

The problems detected affect all sorts of bridges, from those in tiny, out-of-the way areas to busy overpasses in Halifax.

The Prospect Road Overpass on the outskirts of the city was listed in serious condition. Damage to the bridge includes the loss of structure in its steel girders, the main horizontal supports.

Inspection reports in 2012 and 2013 for that overpass also say the bridge bearings, which are sandwiched between beams and the foundations, were deteriorating to the point where pieces had broken off.

The bridge is on schedule for repairs in four years, and there are quarterly inspections to ensure it doesn’t deteriorate further.

Highway 7, located along the province’s windy and scenic Eastern Shore, has a dozen bridges that were in poor or serious condition, the database says.

“Timber abutments are rotten,” says an inspection report dated August 14, 2012, on the Gaetz Brook Bridge, one of the bridges cited along that stretch of road. The Spry Bay Bridge, east of the Gaetz Brook Bridge, was found to have “severe widespread crushing of abutment and pier members” in an inspection report dated April 3, 2012.

“All of them are deteriorating at roughly the same rate and they’re all coming up due for a major rehabilitation or replacement,” Will Crocker, the province’s chief bridge engineer, said in an interview.

On the Trans-Canada Highway between Halifax and Truro, an overpass at Nine Mile River is listed as having “heavy pitting and section loss on girders,” with a note saying, “superstructure needs repairs.”

Crocker said the Transportation Department will keep monitoring the bridges and, in some cases, the work will be timed to coincide with highway upgrades.

In some counties, inspectors occasionally add handwritten notes on the state of decline of the bridges, many of them small and on quiet roads.

“Bad shape,” an inspector says about the Campbell Meadow Bridge in Kings County. “On the project list for last two or three years!”

In Cape Breton, the Crowdis Bridge over the Margaree River was closed due to its deteriorated condition. After pressure from community leaders who were worried about being cut off from emergency services, the Transportation Department agreed to replace it.

However, Fitzner said such agreements to fix one bridge could mean communities have to accept that other small bridges can’t remain open.

“We ultimately need to look at the amount of infrastructure we have,” he said. “At some point in the future does it make sense to have three or four crossings over a river if one or two of them would suffice?”

In the meantime, he estimates the province is about $100 million a year short of what’s needed to keep its highways and crossings in good condition.

“It’s going to remain a challenge just because of the financial position of the province,” he said.