Power up: Are lithium-ion batteries ready for prime time? Part 1 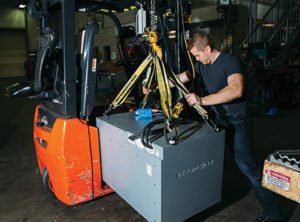 Lithium-ion batteries are the new kid – motive-power wise – and they are beginning to gain traction in distribution centre operations. The increased focus on speed in omni-channel fulfillment is in part driving the new interest in the technology, which promises faster charging, longer work times, better longevity and lighter weight. All this comes at a cost, of course, and we were curious to see who is making it work.

Read on to get perspective on lithium-ion from a start-up Canadian manufacturer Stromcore, and the implementation experiences from a cold-storage user – Conestoga Cold storage. We’ve also got a technical explanation of li-ion versus new lead-acid Thin-Plate technology, and finally a look at the potential risks of li-ion batteries.

Running powered equipment in a cold-storage facility is a challenge. Available technologies – lead-acid batteries, hydrogen fuel cells and lithium-ion batteries – all have their issues, but there’s nothing like a real-world test to make the choice clear.

“Lead-acid batteries, for us, were a dead-end road. It was very expensive from a lot of perspectives. We tried fast-charging. We tried opportunity charging, and there was just nothing good about it.” That’s Conestoga Cold Storage’s purchasing manager Geoff Ditner, explaining why the Kitchener, Ontario-based company was interested in a lithium-ion trial when they were approached by Toronto-based Stromcore.

The trial began with the introduction of li-ion batteries in two reach trucks, operating in the freezer at -18C. In the old set up, with the lead-acid batteries, the operators needed to change batteries a couple times each shift. And at Conestoga there’s no battery room attendant to do the changes, so operators would be off the trucks, in the battery room for 10-minutes at a time, switching out the lead-acid batteries.

With the li-ion batteries the drivers are able to charge them up at lunch hour and keep going all afternoon, never dipping below 50 percent charged. “We were very impressed with what we saw initially,” Ditner says. “If they’re changing batteries two times a shift that takes 10 minutes. If you do that three times a shift, there’s half an hour of non-production.” He also notes that not having to change batteries eliminates a degree of risk to workers.

The trial was not without a hiccup, however. Ditner reports that the charger technology they had didn’t communicate well with the li-ion batteries, but once the chargers were replaced with some better suited to the battery profile, the issues were resolved.

Next, Conestoga added two more li-ion units for counterbalanced fork trucks being used on the docks that feed an automated system that operates 24/7. The docks were a pain point for the company.

“With the fast-charged lead-acid batteries there was just no way they could keep up, so we actually had to have extra equipment,” Ditner notes. “We had extra forklift batteries, so that when they kill the battery, they drove it over, hooked it in, and then drive another truck and go, so we were doubling up on our equipment. We had 10 counterbalanced trucks, 10 batteries doing the job that five could easily do, and maybe four. “

With the demo units on the dock, which is about zero to +2C, “these guys are trying to kill these batteries, and honestly, they couldn’t,” Ditner recounts.

Again, however, the lead-acid fast-chargers did not work well, so another set of purpose-built li-ion chargers was added, solving the problem.

“We have some infrastructure to change over to accommodate chargers; we can’t rip out everything we have and put everything in simultaneously. We have to do it in stages,” Ditner says. “We have more batteries than chargers. That was a bit of an experiment on our end, just to see how that would go, and we don’t need a charger per truck, per battery. It requires so little charge time that the operators are making it work.”

Not needing a changer per battery saves capital costs, and Ditner also notes that they were only getting two and a half years life out of the “very expensive” lead-acid fast chargers. As well, with the changeover for the dedicated dock equipment they’ve retired five trucks. “When you look at the best part of $40,000 a truck, and then batteries, then you’re talking $300,000 for five vehicles,” Ditner says.

The li-ion batteries come with a 10-year guarantee, but Ditner says even if they only get five years out of them “we’re still way better off. We tracked some in production. We’ve got the very first demo batteries still going in our truck down there, and that’s two years old, and it performs exactly the same as when it was just commissioned a week ago. Whereas that with the lead-acid battery, its capacity will be dropping over a period of time.”

While he acknowledges that the transition is still in progress, saying Conestoga is ‘maybe half-way”, Ditner is clearly convinced. “So far it’s all positive,” he says.