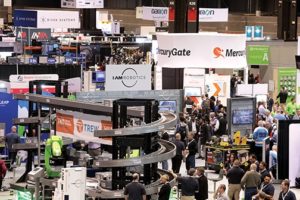 Visitor registrations were up 11 percent over the last show, at 49,718.

If you hadn’t known it was a materials handling show you might have been excused for thinking the huge, dense crowd at the gates to the 2019 ProMat expo was waiting for a celebrity or big-ticket concert.

But no, it really was materials handling, and people are truly excited this year. Indeed, the show at McCormick Place in Chicago this April was buzzing with activity and excitement for the entire four days.

Whether it’s the incredible demand for e-commerce fulfillment solutions, the labour shortage, a fascination for automation, or perhaps the three factors coming together, ProMat was at its biggest this year. According to organizers MHI, registrations were up 11 percent over the last show, at 49,718. All these folks crowded into 425,000 square feet of floor space to see 938 exhibitors.

ProMat visitors included key decision-makers in virtually all manufacturing and supply chain industries including a majority of the Fortune 1000 and Top 100 Retailers. A large number of buying teams from key firms attended the show. According to registration data, 82 percent of attendees had buying authority and 34 percent plan on spending $1 million or more over the next 18 months on equipment and systems.

“Investment in supply chain innovation is at a critical inflection point, with a trend of declining investment from 2015 to 2018 being more than countered by a 95 percent increase in projected spending for 2019,” said George Prest, CEO of MHI.

“As a result, the energy level among visitors and exhibitors was at an all-time high as more attendees were actively seeking best-in-class solutions for their manufacturing and supply chain operations.”

Alongside the obvious theme of automation in operations, which was impossible to miss with the massive installations that dominated the show floor, exhibitors and attendees were talking about digitization, hyperlocal fulfillment and developments in battery technology.

Along with the healthy traffic on the show floor, other highlights included the educational conference that accompanied the ProMat exhibition. This included keynotes on blockchain in supply chains, and a panel discussing the findings of the 2019 MHI Annual Industry Report – Elevating Supply Chain Digital Consciousness.

This keynote panel discussed how incorporating blockchain technology into your operations can have a tremendous impact on transparency, identity and trust, payments, flexibility and responsiveness — and result in a more efficient, cost-saving, risk-reducing supply chain. It was chaired by Karim Lakhani, a professor of business administration at the Harvard Business School. He was joined by David Cecchi, senior director of enterprise data at Cargill; Leanne Kemp, Queensland chief entrepreneur, C3PO First CEO, and founder of Everledger; and Michael Reed, director of the Blockchain Program at Intel Corporation.

Lakhani started out by explaining the basics of blockchain, but disputed conventional wisdom that it is disruptive. He sees it as a “foundational” technology that will take time to reach maturity, notwithstanding the World Economic Forum’s prediction that 10 percent of global GDP will be stored in blockchain by 2027.

Because it can be used for any transaction that requires a binding contract it is well suited to numerous different industries and processes, especially supply chain. Lakhani posited that within the next 10 years blockchain will be driven by the development of smart contract technology.

David Cecchi professed himself “deeply skeptical” of blockchain as a business panacea, but believes that it has application potential for tracking of products from provenance to end user. Cargill, an agricultural products manufacturer, is using a blockchain app now to offer “Turkey Traceability” that allows customers to track their holiday bird back to the farm it was raised on.

The drawbacks of the technology are legion, however, with “a fundamental lack of understanding of the implications” being the primary problem, he said.

To remedy this Cargill has added a primer on blockchain to its executive education program. “People have to understand that everyone can see everything on the chain,” he added. And they need to lose the misconception that blockchain knows the truth. “It only knows what’s recorded,” he said, and if that’s false, whether deliberately or through an error, it’s there in perpetuity.

He believes that it will be very difficult to get companies to the point of agreeing on the rigid business rules that will be required for it to work. “You can’t use post-it notes stuck beside the phone any more” to manage processes in a blockchain-enabled business world, Cecchi said.

Intel’s Michael Reed agreed that the real hurdle will be normalizing processes. “Blockchain as a ‘team sport’ will only be interesting when lots of companies are playing,” he said. He sees the development of consortia as the key to the technology’s ultimate success.

When asked about the risks in blockchain, Leanne Kemp said the biggest danger is that it will fail “because humans are involved”. She is a strong advocate for the technology, however, recounting how it has been a useful tool for the diamond industry, which was a tech dinosaur – using paper tracking techniques – but essentially an ideal candidate for blockchain because of the unique properties of the gems and their high value. However, her caution stems from the difficulties that will be inherent in achieving the agreement necessary among corporations for the technology to develop a wider scope.