Campbell’s Sweets Factory found the ideal boxes for its operations

December 25, 2018
by Inside Logistics Online Staff

December 25, 2018
by Inside Logistics Online Staff 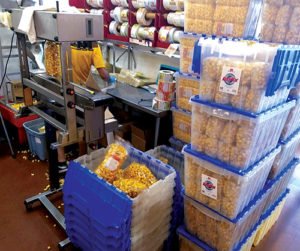 Popcorn is stored and transported in the clear boxes.

Campbell’s Sweets Factory is a Cleveland, Ohio, store which, since 1975 has manufactured and sold a wide variety of gourmet popcorn, cupcakes and other sweet treats. But until recently the company had a problem with its storage and transport containers.

Owner Jeff Campbell says they were using different sized tubs with separate lids, along with cardboard boxes, which ended up being problematic. The lids kept getting separated from the tubs and the cardboard presented a disposal issue.

While searching for a lasting solution, Campbell began his search online. He came across Akro-Mils products, and noticed the KeepBox right away.

Since Campbell switched to the Akro-Mils product, he has seen a cost savings, along with efficiency improvements. He says the KeepBoxes can nest in each other when empty, “we can stack these six to seven layers high, they fit perfectly on shelves, and they’re reusable.”

Campbell had specialty shelving specifically designed to hold the KeepBox and allow them to slide from one end to the other for product rotation. “We have four store locations, all of which use the KeepBox for our storage needs,” he says. 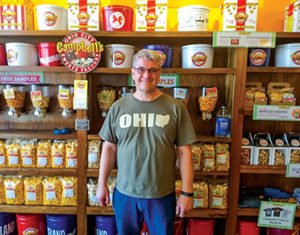 Jeff Campbell says the boxes are keepers for his business.

“Christmas is the busiest time of year for us. We start making popcorn ahead of time; date the containers and store the popcorn in the KeepBoxes. We build up inventory during the early winter as we prepare for our busy season, so the KeepBox is a great way to store the finished product.”

Reaction from employees has been positive since switching to attached-lid containers. Employees say the KeepBox is much easier to pack popcorn in, and easier for one person to carry. They call them the “Blue Tops”, because of the blue, attached lids.

The boxes have an advantage when transporting bagged popcorn from one store to another, Campbell noted. It’s easier and more convenient, and less time-consuming than the old system of cardboard boxes, and tubs with lids. The lids would crack, break, or separate from the tubs; with the KeepBox they do not have this problem. They are a uniform size, making it easy to maximize the space in their trucks. They last a long time, eliminating having to regularly order new containers.

The transparency of the container is vital for quickly identifying the box’s contents. “Being able to see through it is a valuable feature. It is a fine product, I wouldn’t change anything,” Campbell said.