UPS Chairman and CEO, David Abney, spoke about the peak delivery season, the growth in online shopping, and the company's foray into drone deliveries 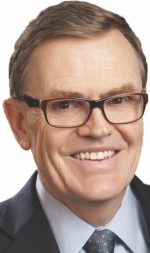 DALLAS – Online shoppers are becoming more demanding – impatient might be a better description – and that is good for UPS.

Profit at United Parcel Service Inc. is rising partly because next-day and second-day deliveries in the U.S. are booming.

Big Brown has invested heavily in new, highly automated sorting facilities to handle the growing volume. The company will get a big test of that investment during the upcoming holiday season, when it expects to process about 32 million packages per day.

UPS Chairman and CEO David Abney, 64, spoke recently with The Associated Press about the peak delivery season, the growth in online shopping, and the company’s foray into making deliveries with drones. The comments are edited for brevity.

Q. UPS just reported a huge increase in next-day deliveries in the U.S. What’s going on?

A. There has just been a structural change when it comes to air shipments, and big e-tailers and retailers and others are wanting to get packages to customers within 24 hours. Our next-day volume of core shipments is up 24 percent, our second-day or our preferred is up 17 percent, and it really led to our best quarterly profit in history of 112 years, and we’re happy by that.

Q. How about international revenue? That was nearly flat.

A. The top line from the U.S. standpoint was very positive, and from the international side top line was a little less than what we would have liked to have seen, but under these circumstances it still increased, so we took that as a positive aspect too.

Q. You’re heading into the peak season for business. How are you set up for delivery of holiday purchases?

A. We’ve got momentum for peak. The forecast: we expect that the number of shipments will increase 50 percent over what we normally do. Our service levels are high. We’ve opened our new buildings early, so they’re operating now, ready to go. We have the new aircraft in place. We’ve announced we’re hiring 100,000 employees . But the big thing is because the machine which is our network is running so effective right now, we believe that that carries right into peak. So we are in solid shape.

Q. Is the growth in online shopping going to slow down?

A. We don’t see a slowdown there. We’ve got to remember less than 15 percent of total commerce is e-commerce at this point, but it’s increasing. It is certainly a big part of our strategy.

Q. How are changes in the delivery business affecting revenue and costs?

A. Some of the structural change that has occurred with next-day ground, where retailers are having more and more of their shipments come out of their stores, so we’re getting much smaller shipments and lighter. That’s going to affect revenue per piece, but the big thing is our cost per piece is reducing much more than our revenue per piece.

Q. Does that add complexity to your network?

A. Yes. When you say complicated, we’ve got a very complex, smart logistics network. We collaborate so closely with the top 1,000 or so customers that they know our capacity, we know their needs. This is not an industry for the faint of heart, there’s no doubt about that, but with the investments we have made we’ve got an unparalleled service and it’s showing with the results.

Q. Amazon.com is building a delivery network . How big a threat is that to UPS?

A. Amazon and we have a good relationship, it’s mutually beneficial, but we monitor what they or any other competitor or potential competitor could do. Separate from our competitors, we chose to lean into e-commerce quite a few years ago, and we have had good success, but that’s all across the e-commerce ecosystem. It’s small and mid-size companies, it’s large retailers and e-tailers including Amazon. Our mission is to help small and mid-size companies compete with the large retailers and e-tailers. It’s much bigger than one company, and we are leaning in and it’s working.

Q. You announced a deal with CVS for deliveries by drone . When will you start testing that?

A. I think our test shipments will (start) quickly, we’re working closely with the FAA (Federal Aviation Administration). We are going to be adding (deliveries by drone at) hospitals at a rapid clip, and of course we announced the University of Utah as our next one.

Q. How quickly are you going to expand your drone business?

A. Whether it’s our drones or it’s other companies’, we are flying drones today as we speak. As we add these locations, it will ramp up exponentially. We have already made 1,500 commercial deliveries since March. Where everyone is announcing these test flights, we’ve been actually making commercial deliveries. It’s small today, but it will add up greatly in the near future.

Q. Chief Operating Officer Jim Barber is retiring. Some analysts saw him as your successor. Who will succeed you?

A. We’ve got a deep bench, we’ve got a board that’s actively involved, and I’m having so much fun now I’m not even thinking about those things (retiring). Jim (has been an) excellent partner, did a lot of good stuff for us, but you know the natural progression of things is, especially at UPS, where you start very young, when you get a chance to retire you look at those opportunities. That’s what that was, pure and simple. We wish Jim the best, but this company will continue to move forward.