Schindellegi, Switzerland—The renowned adventurer and off-road driver Rainer Zietlow and his team mates Marius Biela and Matthias Prillwitz, have achieved a spectacular new world record with the logistics support of Kuehne + Nagel: Driving from Nordkapp, Norway, to Cape Agulhas, the southernmost point of Africa in 21 days in a Volkswagen Touareg.
The “Cape-to-Cape” race saw Team Zietlow drive north-to-south direction through Europe and along the entire African continent through countries in eastern Africa. Starting at Nordkapp, Norway, the northern-most point of Europe on September 21, 2014, the journey passed through 19 countries covering a total distance of over 17,000 km. 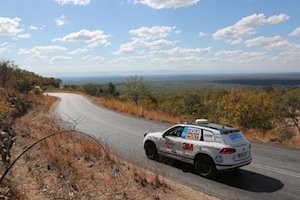 In the middle of the adventurous trip, Zieltlow was stopped by an unforeseeable accident in Tanzania. His half-destroyed car could only be repaired after Kuehne + Nagel experts assembled spare parts in Europe and flew them to east Africa. Due to the company’s set up in Tanzania, Customs clearance processes could be completed with minimal delay. The team finally reached their destination in around 21 days, beating the old record by six days. Without the incident the net travel time amounts to just 8 days, 10 hours and 26 minutes.

During the entire race Kuehne + Nagel handled all logistics requirements for Zietlow and his team. Specialists at the logistics provider’s airfreight hub in Frankfurt, Germany, organized an exceptional airlift by Antonov as well as short-sea services to get the specially equipped VW Touareg vehicle and its passengers from Turkey to Egypt.

In addition, Kuehne + Nagel managed the synchronisation of border crossings, including liaison with embassies, regulatory bodies and Customs 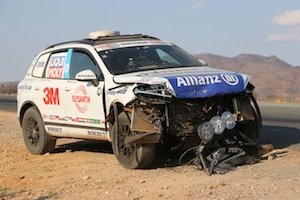 authorities to avoid delays and ensure the team could complete their route in record time.

Three times Guinness World Record holder Rainer Zietlow commented: “Throughout the whole world record drive Kuehne + Nagel was always a reliable and competent partner, especially in our unforeseen case of emergency in Tanzania. This could have strongly jeopardised our world record attempt, had it not been for their quick response and their global and local expertise. Without their support we could not have completed our world record drive.”