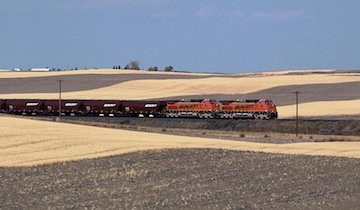 Toronto, Ontario-based Ceres plans to connect the property, which is located in Northgate, Saskatchewan, to BNSF Railway’s US-based rail network.

It will also build two high-efficiency rail loops, each capable of handling unit trains of up to 120 railcars. Ceres says each loop will be dedicated to an individual task: one will be used for grain handling and shipping, the other will be the oil shipping and transloading line. Ceres’s goal is to handle 40 million bushels of grain annually and 70,000 barrels of oil per day.

The company will also build a logisitics centre where equipment and materials used by the province’s resource economy will be handled.

Construction on the $90 million facility will begin in the spring, and is expected to take three years to complete. Approximately 100 construction jobs will be created while the facility is being built and once operational, the hub will employ 30 permanent workers.

Ceres has partnered with the Scoular Company, an Omaha, Nebraska-based agricultural marketing company, which will fund, own and operate the grain handling facility. Ceres’s grain subsidiary, Riverland Ag, will be a major customer of the grain facility, and will work closely with Scoular on the procurement of certain grains.

“The Northgate hub is good news for Canada’s economy and particularly good for Saskatchewan and western Canada. It will help ease the bottleneck of getting commodities—especially grain and oil—out of Saskatchewan and will provide a new and competitive option for shippers and exporters,” said Michael Detlefsen, president of Ceres.

“The Saskatchewan farmer is poised for much greater participation in an expanding and highly competitive global market,” said Bob Ludington, chief operating officer of Scoular. “This important project gives high quality Canadian wheat direct line access to US and Mexican flour millers, and will open extensive new markets for Canadian canola. The Northgate hub will serve to shrink the distance between Canadian supply and global demand, expanding the marketing options for area producers tremendously.”

The facility will also be very good news for Canadian oil producers looking for new, cost-competitive ways to get Saskatchewan oil to higher-priced markets. “We are building on the significant experience we have gained from our investment in the Stewart Southern Railway, one of the largest transporters of oil by rail in Western Canada. Our discussions are nearing completion with a number of Canadian energy companies for take-or-pay oil transloading contracts at the Northgate facility,” said Detlefsen.