Michaels honours Con-way as carrier of the year 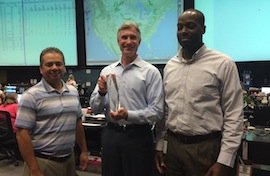 Last week, craft supply store Michaels announced that Con-way Truckload has been selected as their Carrier of the Year. As a result of the company’s timely deliveries and professionalism, Con-way Truckload received this honour for the third time in seven years. The company also received the designation in 2008 and 2009.