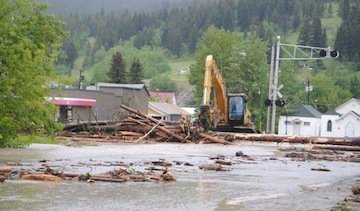 Segments of track were damaged in the flood. (Photo: Government of Alberta)

CALGARY, Alberta—CP’s main line west of Calgary, which runs through the Banff-Canmore region of Alberta, is once again open.

Flooding in the province forced the closure of the track and left sections of it damaged. According to CP, crews have restored the affected segments and made the line safe for use.

Another section of the main line track in Calgary was expected to be open this morning.

A segment of track running south to Lethbridge was also damaged by the flood. CP says it should be repaired by Thursday.

While the tracks were closed, trains were diverted to other parts of CP’s network, specifically lines running in the southwest area of province. The company also said it received assistance from CN and other carriers over the weekend.

“Considering the devastating impacts to thousands of people and property that this extreme weather left in its path, I commend the resiliency and dedicated efforts of all our CP railroaders, who safely worked to get our network back in service so quickly,” said CP CEO, Hunter Harrison, who noted during the four-day period, crews responded to over forty individual locations impacted by high water in both Alberta and the British Columbia interior.

“The force and extent of this flooding was extensive and evolved from hour-to-hour. As locations were identified, CP crews responded with equipment and resources and carefully managed to safely and systematically restore each outage,” said Harrison.