No injuries at Halifax's Fairview terminal 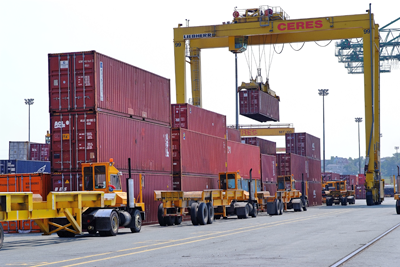 HALIFAX, NS–Firefighters responded to a radiation scare aboard a ship at the port of Halifax on Thursday night, but later determined there was no leak of radioactive material.

A city news release says firefighters received a call shortly before 10 p.m. after four steel cylinders fell about six metres from inside a container at one of the city’s terminals, landing in a contained area of the ship.

It said the cylinders contained uranium hexafluoride, which is the chemical compound used in the gas centrifuge process to enrich uranium that is then used as reactor fuel or to arm nuclear missiles.

The Halifax regional fire department said there were no injuries and no one was contaminated at the terminal in Fairview Cove in the city’s north end.

Initially, division commander Corey Beals said the department thought it was dealing with “some sort of radiological leak” but about 90 minutes later fire officials said there wasn’t a leak.

“There is no indication anything leaked from the cylinders,” the city said in its news release.

Phil McNulty, the department’s executive fire officer, said those are not dangerous levels but they are high enough to prompt a further investigation.

“It was just an indication it was higher than normal,” he said.

McNulty said the shipping containers are extremely durable and were able to withstand the drop.

“The safety redundancies built in for the transportation of nuclear materials are unbelievable,” he said.

“If this wasn’t done properly, we wouldn’t be singing the song we’re singing now.”

Firefighters evacuated the immediate area as a safety precaution and the crew of the Atlantic Companion—which arrived in Halifax from Liverpool, England—were taken to a local hotel.

The city said all workers at the container terminal tested negative for radiation contamination.

It said Halifax fire department officials remained at the container terminal overnight and were waiting for an emergency response team to arrive from Toronto to do a more detailed assessment.

Calvin Whidden, vice-president of operations for Cerescorp, said it’s rare for containers to get dropped at the container terminal. “It’s once in every 200,000 lifts,” he said.