BC and Ottawa commit $15 million each 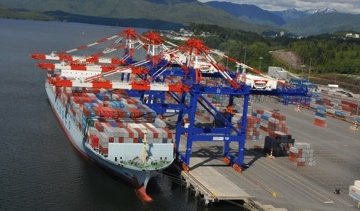 The Ridley Island Road, Rail and Utility Corridor (RRUC) project will build road and rail access to a 405 hectare (1,000 acre) parcel of industrial land at the Port of Prince Rupert. It will also install the necessary utilities needed to service the site. The $90 million public-private partnership will be funded by the federal and provincial governments, CN Rail, and the Prince Rupert Port Authority.

During the ceremonial signing, federal minister of international trade Ed Fast and BC MLA Rob Howard each committed $15 million on behalf of their respective governments.

“Building capacity at the Port of Prince Rupert is necessary for the expansion of Canada’s trade with fast-growing Asian economies. This investment unlocks the sustainable development of port infrastructure and industrial waterfront that will benefit industries across Canada,” said Don Krusel, president and chief executive officer of the Prince Rupert Port Authority, when the project was first made public.