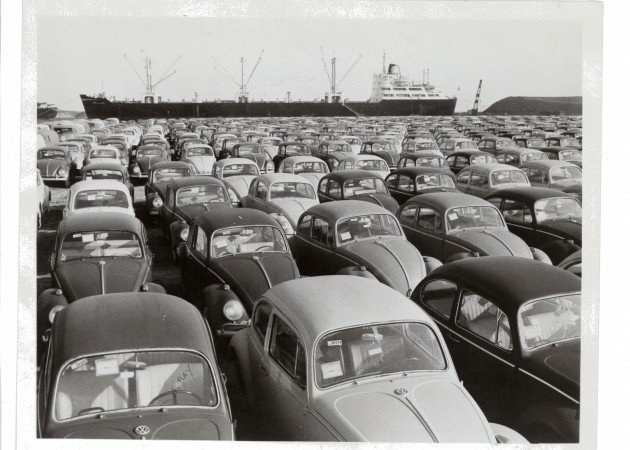 April 18, 1966: 1,527 Volkswagens from Germany are unloaded at the ship channel. Non-bulk cargo, such as vehicles, used to be common imports through the Port of Toronto. Today, most of the cargo that comes in by ship is bulk: salt, sugar, cement and aggregates.

The exhibit, entitled Making Connections to Toronto’s Waterfront – A Historical Retrospective, was curated from the extensive yet rarely viewed PortsToronto archive. The images presented will take visitors on a journey through time by depicting the evolution of Toronto’s waterfront, Billy Bishop Toronto City Airport, the Port of Toronto and Harbour, and other key areas that have played a significant role in the development of the city as a commercial and cultural hub of Canada.

In the early years of Toronto’s development, a large portion of the city’s current waterfront and South Core areas were either uninhabitable swampland or under water. In the 1900s PortsToronto, then called the Toronto Harbour Commissioners, built the waterfront and constructed more than 2,000 acres of land from the mouth of the Humber River to Ashbridges Bay. Today, the area is home to businesses, residences, parks and some of the most significant commercial and residential development currently taking place in North America.

“The photos selected for this exhibit provide an interesting glimpse of the early days of the modern Toronto waterfront and chronicles its evolution from swampland and ramshackle shoreline to industrial port to mixed-use neighbourhood,” said Geoffrey Wilson, CEO, PortsToronto. “From the creation of the Port Lands and the building of the quays that extend into Toronto’s Harbour to the development of the Leslie Street Spit and construction of Billy Bishop Toronto City Airport, the exhibit showcases the transformation of this important area and illustrates the role PortsToronto has played on Toronto’s waterfront over the last century.”