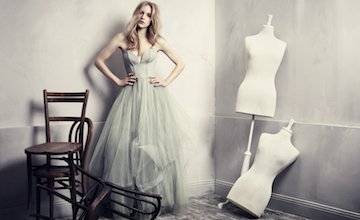 STOCKHOLM, Sweden—Fashion retailer H&M Hennes & Mauritz AB is slowly getting closer to its goal of ensuring all the cotton used in its clothing has the least harmful impact on the environment as possible.

According to company’s 2012 Sustainability Report, last year 11.4 percent of the cotton used by H&M originated from eco-friendly sources with 7.8 percent being certified organic and 3.6 percent earning the Better Cotton designation (cotton produced by farmers who employ efficient water-management techniques, who conserve natural habitats and who minimize harmful crop protection practices). In 2011 a total of 7.6 percent of the cotton was organic. No Better Cotton was used in 2011.

That made H&M the largest user of organic cotton in the world, according to the Textile Exchange industry association.

The company has also vowed to promote the use of recycled cotton in its products.

“Aside from further increasing our use of organic cotton in the future, we’re investing heavily in Better Cotton and gradually increasing our use of recycled cotton. All together, we are right on track with our target to use only cotton coming from these sources by 2020 at the latest,” writes the company in the Sustainability Report.

Beyond cotton sourcing, the company also took a number of other measures to improve its ecological footprint, including increasing its recycling programs.

According to the report, “the majority of our own waste is generated either by or sent to our distribution centres, where it is handled in accordance with our long-term goal of sending zero waste to landfill. This is also in line with our ambition to close the loop on all our waste.

“In 2012, 92 percent of the waste handled in our distribution centres was recycled. Our target for 2013 is a recycling rate of 95 percent.”

H&M also put in place rainwater harvesting programs at its facilities. According to company figures, over 240,750 cubic metres were collected at its DCs across the world.

“In 2012, around 90 percent of the shipped volumes were transported from the production country to our distribution centres via sea or rail. Since 2010, emissions resulting from transport have increased by four percent, while sales increased by 11 percent.”

H&M says it has “our goal is to reduce our operations’ total emissions by 2015–despite our continued growth of 10 to 15 percent new stores each year.”

In addition to the Sustainability Report, which also details the retailer’s efforts to introduce a used clothing recycling program, to reduce the use of chemicals such as perfluorinated compounds (PFCs) and solvent-based polyurethane (PU), and to improve working and education standards for its employees, H&M also released its supplier list, which includes details about factories around the world which produce garments for the company.
Print this page