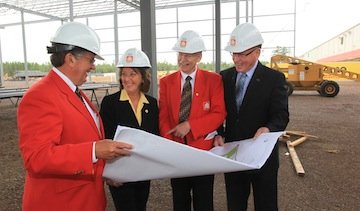 The St. Jacobs, Ontario-based company is adding 236,000sqf to the 350,000sqf facility it operates in Debert, Nova Scotia.

Harvey Gullon, Home Hardware’s manager of eastern distribution, says a combination of overall company growth and an expanding regional base has “created the need for an expansion,” he says. “We ran out of space.”

The retailer serves 217 stores in Quebec and Altantic Canada out of the DC. It also exports goods to Saint Pierre and Miquelon from the location.

The facility houses 60,000SKUs, and while that number isn’t expected to change once the expansion is complete, the number of items in stock will definitely increase, as will the DC’s efficiency, according to Gullon.

The expansion plans have been in the works for a number of years, but Home Hardware had to acquire additional land from CN and from Colchester County. The final land purchase was completed earlier this year, in January, allowing the expansion to move forward on what is now a property of 60 acres.

The construction is planned in two parts. Phase I should be completed by January 2014, allowing the company to move operations into the new section of the building by February. Then Phase II can start. This phase involves tearing down the old dock section and building new docks.

“We needed to expand our shipping area. We haven’t expanded it since the facility was originally built,” says Gullon, adding the new facility will allow for cross-docking. The DC will also allow Home Hardware to modernize some of its other processes and systems.

“We’ll have new racking and a new conveyor system. We will have a couple of miles of conveyors,” says Gullon.

The company is also planning to install a brand new warehouse management system (WMS), beginning in March 2014, and it will be rolled out in the new facility first.

“We wanted to build the DC expansion first, as much as possible. Then get it up and running in new DC, work out the bugs and them implement it across the country,” says Gullon.