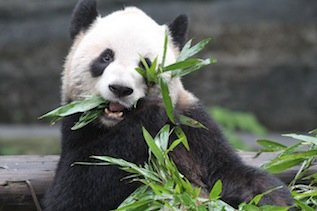 The animals are scheduled to arrive at Toronto Pearson International Airport on March 25, 2013. They will be flying on a FedEx Express supplied MD-11F aircraft named the FedEx Panda Express. Once on the ground they will be transported to the Toronto Zoo where they will remain in a Canadian Food Inspection Agency (CFIA) 30 day minimum quarantine. Each panda will travel in a specially designed enclosure, constructed by FedEx. The enclosures measure 198cm by 142cm by 137cm and weight approximately 360kg.

The enclosures have been placed in the pandas’ current habitats at the Chengdu Research Base of Giant Panda Breeding and Chongqing Zoological Gardens in China, giving the endangered animals an opportunity to familiarize themselves with the enclosures well before their journey.

The pair of breeding-age pandas are on loan to Canada for the next ten years. They will spend at least five years in Toronto. After that, they will be transferred to the Calgary Zoo. If they do manage to produce an offspring, Er Shun (the female), Da Mao (the male) and the cub would remain at the zoo until it was deemed safe to relocate them.

The long-term visitation of pandas is part of China’s “panda diplomacy” approach to international relations. This specific loan was originally announced during Stephen Harper’s trip to China in February 2012.