Flight undertaken at urging of pilot 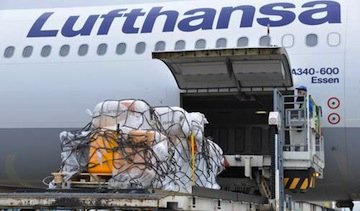 Blankets, tarps and medical supplies are being loaded on a flight to Manila (Photo: Lufthansa)

FRANKFURT, Germany—An idea that germinated in the mind of a Lufthansa pilot led to an emergency relief flight to the Philippines.

Captain Frank Uhdris was scheduled to pilot a Airbus A340-600 wide-body jet to Manila. Knowing that he was flying into the country devastated by Typhoon Haiyan, Uhdris suggested the German air carrier turn the belly capacity of the plane into a cargo hold for emergency supplies.

The 25 tonnes of equipment were loaded onto Flight LH9922 which departed from Frankfurt on Sunday, November 10 at 9:20 AM local time. The flight was expected to land at 10:00 PM German time/5:00 AM Manila time.

“This fast unbureaucratic aid is entirely for the benefit of the victims of the havoc caused by Typhoon Haiyan in the Philippines. Seldom before have such urgently required relief supplies been transported so quickly to a distant continent,” said World Vision chairman Christoph Hilligen.

“In catastrophes, every hour counts in the provision of aid and the logistics are paramount,” said Lufthansa Cargo chair Karl Ulrich Garnadt.