A look at the less serious side of supply chain 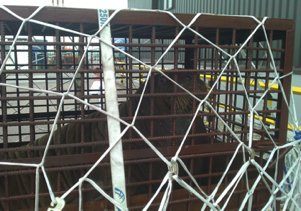 UDMURTIA, Russia and HAMBURG, Germany: Sgata-Neseyka is a 520kg walrus with a major dental problem: he has an ingrown tusk.

The walrus, which is a member of a rare subspecies of the Altantic walrus family, is a resident of the Udmurtskiy Zoo, where he is known as a talented performer who can sing, dance, clap, play the tambourine and kiss the hands of spectators. He was raised by the zoo staff after his mother died while he was still a baby.

But lately he has been feeling under the weather, which led zookeepers to decide Sgata-Neseyka needed emergency dental care to extract the tusk.

With no local veterinarians or dentists who could handle the operation, zoo officials decided that Tierpark Hagenbeck TPG Hamburg would be Sgata-Neseyka’s best bet.

To get the walrus to Germany, Russian air cargo company, AirBridgeCargo Airlines flew Sgata-Neseyka to Germany. For the comfort of the walrus, the cargo cabin temperature was maintained at between 5C and 10C for the entire duration of the flight. He spent the trip in a specially constructed transportation cage, built to conform to the IATA’s live animal transportation regulations. Zookeeper Evgeniy Thashkin and Svetlana Malysheva, director of the zoo, accompanied him on the flight.

After the operation, he will spend a few weeks in Germany to recover before returning to Udmurtskiy Zoo.