Built to be the largest Canadian-flagged ConRo vessel 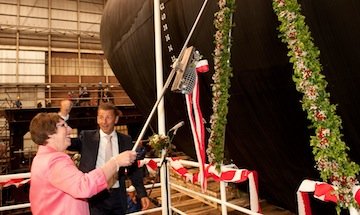 HALIFAX, Nova Scotia—With the breaking of a bottle the Oceanex Connaigra was officially christened and launched.

The vessel, which is owned by St. John’s, Newfoundland-based Oceanex Inc, is described by the company as the largest Canadian-flagged ConRo ship. It is 210m long, has a deadweight of 19,300 tonnes and sports 13,700sqm of available space for containers, vehicles and over-sized cargo. Construction of the ship began eight months ago in the Flensburger Schiffbau-Gesellschaft (FSG) shipyards in Germany, after four years of design and planning. While seaworthy, final work needs to be completed before the Connaigra can depart for Newfoundland. After the ceremony, the ship headed to the FSG fitting out quay, where the final details including the bridge and accommodations block will be installed.

It has moveable vehicle decks, a wide reinforced side ramp, anti-roll stability tanks and a gyro controlled active fin stabilizer system, and the strengthened hull necessary for designation as an ice-class vessel. According to Oceanex, the ship’s design and its “optimal lines” means it “will use 30 percent less fuel than comparable size ships, thereby reducing C02 emissions by about 20,000 tons per year”. It also has waste gas desulphurization plant which will allow the ship to meet the stricter emissions regulations which are coming into effect in 2015.

“The Oceanex Connaigra is a considerable investment and an essential element of our company’s strategy to meet the needs of our clients throughout Eastern Canada. Furthermore, we are thrilled to build a ship that is classed by DNV as a “clean ship” and will be a world leader in energy efficiency and environmental protection,” said Oceanex executive chair, captain Sid Hynes.

The Connaigra is expected to arrive in Canadian waters in October.