A note of optimism kicked off the Canadian chapter of the International Warehouse Logistics Association’s third annual spring conference in April. 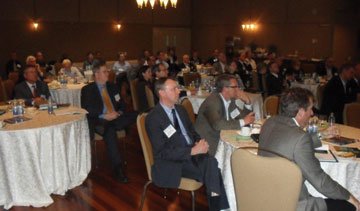 A note of optimism kicked off the Canadian chapter of the International Warehouse Logistics Association’s third annual spring conference in April.

Roughly 70 members attended the one-day event, held in Vaughan, Ontario. The conference’s theme focused on 3PL growth. Participants began the day with a survey of Canada’s economic landscape by Paul Ferley, assistant chief economist at the Royal Bank of Canada.

Ferley said North America’s recovery is expected to continue, with the economy experiencing gradual improvements. The Canadian economy was less damaged during the recession than the US, he said.

As well, high commodity prices will benefit provinces such as Saskatchewan and Alberta while Ontario will remain more dependent on a continued US recovery. He also noted growth in emerging economies will mean high oil prices.

Blair Wolk, director of development at Orlando Corporation, provided a developer’s perspective on the industrial market. The 7.1-percent vacancy rate was somewhat high, he noted. And while there had been a jump in the construction of new distribution centres in 2008, many buildings had remained vacant during the recession. Although the area will see growth going forward, that growth will remain modest, he said.

Wolk cited several challenges in building new DCs. The cost of building a new facility remained high, with a lengthy approvals process. The best bet for those looking for DC space was an existing building with proper zoning already in place, he said.

In 2007, Promane said, Whirlpool had several providers and multiple contract structures, none of which was performance-based. “We really had an entitlement culture,” she said. “Because they had been doing business with us for so long we had transferred control of the entire network to our third parties.”

The company changed the structure within a few years, Promane said, going from 14 regional distribution centres to three in Canada—plus one in Seattle servicing BC—operated by two providers [see MM&D’s April 2008 issue for the full story]. Whirlpool also consolidated with one transportation provider.

Whirlpool performed a network study and laid out a supplier strategy, Promane said. The company also set up performance-based contracts with providers.

“That was a given—we took back control of the contracts,” she noted. “Even before you’re allowed to bid on anything you have to agree on our contractual terms.”

Whirlpool was able to make the changes on time and on budget in a “fairly seamless” way, Promane said. In three years, the company reduced its supply chain costs by $20 million.

Other sessions of the day included one focused on WSIB premiums. Rob Hindrichs, vice-president and chief actuary at Ontario Workplace Safety and Insurance Board, talked about increases to premiums and whether those premiums will hit a ceiling. Hindrichs discussed the WSIB’s funding review, which is investigating ways to make the WSIB more financially sustainable. A final report released to the WSIB will recommend how the organization can improve funding policies. While the report will affect rates, Hindrichs couldn’t say whether premiums would eventually hit a ceiling.

The review will have an impact on several areas, such as how the WSIB sets its rates and how it classifies employers.

Other sessions included a panel of insurance industry experts who discussed risk, while another focused on WSIB injury prevention initiatives and the benefits of belonging to a rate group called the transportation safety group. Another session looked at the latest HR applications for the warehouse industry. Tom Hewitt, president and CEO of Upside Energy Management Inc, gave a presentation on the AircoSaver, an HVAC retrofit designed to reduce compressor energy consumption and demand, emissions and operating expenses.