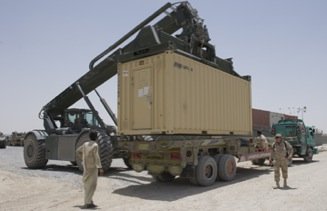 KARACHI, Pakistan: Logistical chaos on the ground at Pakistan’s largest seaport along with truckers’ demands for more money mean hundreds of tonnes of Canadian military equipment remain stranded in Afghanistan despite the opening of the border to NATO traffic after a seven-month closure.

The first truck carrying NATO supplies finally crossed from Pakistan into Afghanistan Thursday but 446 sea containers of Canadian Forces materiel stored in Kabul and Kandahar won’t be moving any time soon, according to the contracted freight company.

`”Nothing is happening right now—it’s quite a nightmare.”

Moving the “low priority” equipment depends on Pakistani truckers, who first have to clear a backlog of some 2,500 NATO Afghanistan-bound containers at the port in Karachi.

Before that can happen, however, the Pakistanis first have to sort out issues with payments, demurrage, and customs-clearance, the chairman of Karachi’s Port Qasim said Thursday.

Adding to the headache are demands for more money from the truckers idled by Pakistan’s closure of the border, which came in retaliation for US airstrikes in November that killed 24 Pakistani border troops.

Pakistan relented after the US government apologized this week.

Now, concerned their lucrative work will soon be drying up as the NATO mission winds down, the truckers are demanding as much as 25 per cent more—potentially adding several thousand dollars to the cost of retrieving a container from Afghanistan.

The Canadian Forces gear—left over from the lengthy combat mission to Afghanistan—comprises “lower priority” material such as tires, parts, tents, barbed wire, forklifts and engineering equipment kept in secure storage, according to the Department of National Defence.

“It’s tents, it’s some non-essential spare parts and those kind of things. We were quite comfortable with what was on the ground but at the same time we want to get that stuff home and back to the units that need it,” chief of defence staff general Walter Natynczyk said.

“It was one of the reasons we left the kind of stuff we did. The stuff that was important we flew out. This was the lowest category in terms of priority and value.”

High priority items, such as armoured vehicles, weapons and ammunition, had already been returned to Canada by air.

Natynczyk said having the equipment stranded is more of an “annoyance” than a concern and it’s too soon to say how long it will take to get it home.

“It’s just the early days yet and I have not seen the details of the agreement between NATO and the Pakistan government. I know the first vehicles have crossed the border,” he said.

“We’re in the position where we have 400 odd containers and we’re working on a plan right now to move them out.

Rodrigues said it would likely be weeks or a month before there’s movement of the goods to Karachi for shipping to Canada.

“I can’t dictate how fast the trucks get into Afghanistan,” said Rodrigues, whose company has been contracting with the Canadian military since 2006. “It’s very difficult to keep to timelines.”

Canada is not the only country anxiously eyeing the situation. The American military, for example, has more than 4,000 stranded containers and the British more than 2,000.

For now, however, there are few trucks available to make the perilous 1,500 kilometre run from Kabul or the almost 1,000 kilometre trip from Kandahar to Karachi.

Insurgents on both sides of the border attacked the transport convoys before the border closure and are again threatening attacks in the volatile region.

Also adding to the woes has been theft from containers—discovered only once they reached Montreal—with gear replaced by rocks and sand. The Defence Department has only said it’s investigating, while offering few details on what was stolen or who might be responsible.

On Tuesday, US Secretary of State Hillary Clinton gave in to Pakistan’s demands for an apology.

“We are sorry for the losses suffered by the Pakistani military,” Clinton said in a statement.

As a result, the Afghanistan-Pakistan border officially opened Wednesday.