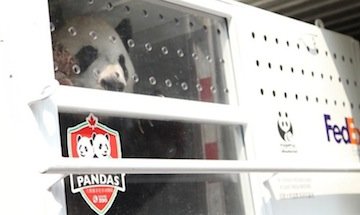 TORONTO, Ontario—They’re finally here. Two giant pandas on loan to Canada from China have touched down in Toronto.

Prime Minister Stephen Harper, his wife Laureen and Chinese ambassador Zhang Junsai were among those on hand to welcome the furry black and white beasts to the country.

Five-year-old Er Shun and her prospective mate, four-year-old Da Mao, arrived in the Panda Express—a specially outfitted FedEx Express Canada plane branded with an image of a panda on its exterior, but even before their 15 hour plane ride, the pandas had some travelling to do. Da Mao made his home at the Chengdu Research Base of Giant Panda Breeding, which is located fairly close to the departure destination at the Chengdu Airport, but Er Shun lived at the Chongqing Zoological Gardens, which is four hours away from the airport by truck.

FedEx Express Canada president Lisa Lisson said the process of preparing the bears for travel began days before the flight. “We created very special customized enclosures for the two pandas and we actually sent them over there,” Lisson said. “They were in the pandas’ environment so they could go up to them and look at them and touch them . . . so when they got inside the enclosures they’d be familiar with them.”

A veterinarian and two attendants accompanied the pandas for their entire journey. So did a FedEx load master who had plenty of experience flying pandas around the world. He has been part of five panda shipments, including FedEx Express’ first panda flight in 2000.

According to Lisson catering to the animals’ capricious dietary whim was part of the job of the flight crew. The aircraft was stocked with 100kg of bamboo, 150kg of bamboo shoots, 50kg of apples, 15kg of fresh water and some of the pandas’ favourite toys.

The bamboo that forms the backbone of the pandas’ diet will continue to be in high demand once the animals are ensconced in their new home. FedEx has agreed to bring in up to 900kg of the plant three times a week from the Memphis Zoo for the duration of their stay, Lisson added.

Lisson said such vast quantities are critical for creatures known for their demanding eating habits.

Bamboo on board for panda provisions

“They actually eat quite a lot. Up to 16 hours a day they can spend eating. They can consume anywhere from 14kg to 20kg of bamboo a day to make sure they get enough nutrition,” she said. “They’re very picky, too. They might go through 10 bamboo just to find one that they like.”

Their arrival, the first panda visit in 24 years, marks the realization of a deal reached when Harper visited China just over a year ago, and is seen as a symbol of a significant thaw in diplomatic relations between the two countries.

The pandas are being taken in specially branded trucks from the tarmac to the Toronto Zoo, where they will live for five years before being transferred to the Calgary Zoo for another five years.

Once they arrive at the Toronto Zoo today, the pandas will be quarantined for 30 days and kept away from the public until a special exhibit opens later this year.

The Toronto and Calgary Zoos played host to pandas in 1985 and 1988, respectively, while another couple took up a brief residence at the Winnipeg Zoo in 1989.