Peace at the Peace Bridge

Canada and New York agree to co-operate on modernization efforts 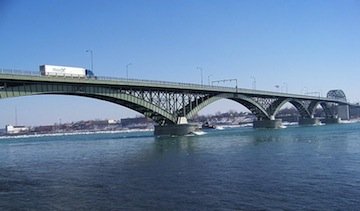 WASHINGTON, DC—Canada and the United States have reached an agreement on the future of the Peace Bridge following months of bad blood between Canadians and Americans on the 80-year-old committee that oversees the crucial southern Ontario border crossing.

Former New York state governor Mario Cuomo and Gary Doer, the Canadian ambassador to the US, said that the agreement—reached after several days of high-level meetings—will speed up improvements to the Peace Bridge, one of the busiest border crossings between the US and Canada.

“It’s called the Peace Bridge, it’s not called the Conflict Bridge,” Doer said in an interview from Buffalo, New York following the announcement. “This is a good deal for hard hats, not lawyers.”

Doer was referring to the New York state legislation that calls for banning the Peace Bridge Authority outright. The ambassador had warned Cuomo that Canada would do whatever necessary to “protect our sovereignty” in the event the bill was signed into law, including going to court.

Cuomo assured Canadians that the legislation won’t be signed into law. The four-page agreement leaves the Peace Bridge Authority intact. The panel holds its next meeting on Friday June 27 in Fort Erie, Ontario.

In recent months, Americans have complained their Canadian counterparts on the 10-member board were deliberately dragging their feet on millions of dollars of modernization projects on the Buffalo side of the bridge in favour of development on the Fort Erie side. Those allegations were met with outrage by the Canadians, who said most of the delays on the US side of the crossing were caused by American regulatory authorities.

The startling dispute included angry demands for ousters, bitter name-calling and public trash-talking, including one instance in which a Canadian on the board referred to a Cuomo ally as his “concubine.”

The hands-on involvement in recent days of Doer and David Jacobson, the outgoing US ambassador to Canada, was an indication of just how closely both the Canadian and US governments were watching the discord on the Peace Bridge Authority, particularly in the wake of Beyond the Border.

That pact on border co-operation was signed with much fanfare between Canada and the US two years ago.

Doer said over the weekend that Beyond the Border was not going to be “driven into the ditch” because of the Peace Bridge dispute.

At the news conference, held at a Frank Lloyd Wright boathouse in Buffalo located near the bridge, Cuomo called the agreement a victory for both Canada and the United States.

The agreement calls for three projects to be undertaken quickly and simultaneously: a study into widening the US plaza, a pre-inspection project to have US-bound cargo trucks examined in Fort Erie to reduce congestion and pollution on the American side of the crossing, and an array of improvement initiatives for the US plaza, including a traffic study.

The Peace Bridge Authority will kick in as much as $50 million for the projects while the rest—about $15 million—will come from New York state.

The pre-inspection pilot project will “proceed immediately,” the agreement states, and will continue for up to 18 months. A permanent, $30 million pre-inspection facility is planned although funding is still “to be determined.”