No reason to move UN agency from Montreal to Doha 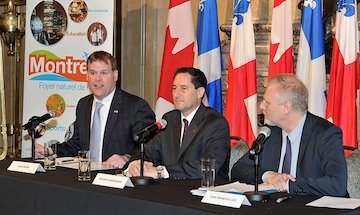 QUEBEC CITY, Quebec—Prime Minister Stephen Harper says there is absolutely no reasonable case to move the International Civil Aviation Organization out of Montreal.

“It’s been based in Montreal for a very long time,” Harper told a news conference in Quebec City. “Montreal, Quebec, Canada have been very good hosts, from everything I understand.

“I’m certainly not aware of any serious complaints about how we host the organization. Montreal’s a sophisticated city that is a hub of the aerospace industry around the world.

“There is absolutely no reasonable case to move the centre out of Montreal.”

His comments came shortly after foreign affairs minister John Baird, Quebec provincial cabinet minister Jean-Francois Lisee (who is responsible for both international affairs and the region of Montreal) and Montreal mayor Michael Applebaum held a news conference in Montreal to announce a common front to prevent ICAO from moving to Qatar.

Baird said all the parties involved in the bid to keep ICAO in Montreal, including businesses and municipal politicians, are more united than ever.

Qatar made a pitch last month to the agency about moving its headquarters to the Middle East kingdom’s capital of Doha. Baird was in Doha in early April and says Qatar officials didn’t mention they were going to make any such bid.

“I want to assure you that the federal government understands what’s at stake here,” Baird said in Montreal.

“We are ready to work with the Quebec government, the City of Montreal, as well as air and aerospace companies to make sure that (ICAO) stays in Montreal.”

ICAO sets international standards for civil aviation and is the only United Nations agency based in Canada.

Baird points out that Qatar is a country with great wealth and is offering a lot of money to lure the agency to Doha, but that shouldn’t be a factor.

“Qatar is a small country with a very small population with a lot of money and they want to build a world-class city,” he said. “We’re so fortunate that in Canada, in Montreal, in Quebec, we already have a great world-class city.”

Besides the Canadian politicians, there are others who support keeping the headquarters here. International unions, for example, say a move to Qatar is at odds with the ICAO’s mandate.

“How can an organization that has to defend the rights and safety of workers and passengers be moved to a state whose citizens’ pleas for democracy are answered with batons and buckshot?” David Cockroft, the general secretary of the International Transport Federation, said in a statement.

Canada also received a vote of confidence from its neighbour to the south.

“The US sees no reason to move ICAO out of Montreal and would not support such a proposal,” David Jacobson, the US ambassador to Canada, said through a spokesman.

Canada has played host to the ICAO since 1946. Its current headquarters were built in the 1990s at a cost of $100 million.

Losing the ICAO would be a financial and political blow for Canada.

Montreal is the hub of Canada’s aviation industry, and its international reputation as a major player is reflected in the ICAO’s longtime residency.

The organization also feeds the city’s economy; it employs 534 staff and says it generates some $80 million annually for Montreal’s economy and 1,200 direct and indirect jobs.

The Qatari bid, meanwhile, is seen by government critics as being politically motivated and a reflection of Canada’s pro-Israel policy in the Middle East. But Baird characterized Canada’s relationship with the Arab world as “excellent.”

“I’ve visited the Arab world eight times (in 10 years) and I’ve been warmly received wherever I’ve gone,” he said.

The rift between Canada and some Arab states extends to issues beyond Israel. The two sides have only just started to patch up holes in their relationship that were the result of long-standing aviation issues.

Both Qatar and the United Arab Emirates have been lobbying Canada vigorously for more landing rights for their airlines, only to see their efforts continually blocked by domestic airlines.

Baird said any strategy by Qatar to use the ICAO issue to pressure Ottawa on landing rights won’t fly.

“I’d just be charitable and say that request is on hold while we put all of our energy into Montreal,” he added.

In its proposal, Qatar said one of the advantages of moving the ICAO out of Montreal was escaping the harsh Canadian winter. Both Baird and Lisee both took jabs at the climate in Doha in defending Canada’s position as host country.

“For my part, I prefer by far to have four seasons instead of an excruciating and humid temperature of more than 40 degrees, 12 months a year,” said Baird.

“If we have to compare between snow and sand, all the representatives who have families here know that children can make snowmen, but it’s very difficult to make sandmen,” he said.

“Winter is something that you can enjoy and it doesn’t last all year—when you look at the heat in Doha [it’s] all year.”

He later explained his comment by saying he always makes jokes to de-dramatize a situation.

“But the fact that we are all here, all three, shows the seriousness with which we approach the situation,” Lisee added.

For the bid to prevail, a minimum of 60 percent of the ICAO’s 191 member states must sign off, a threshold that could send a strong rebuke to Canada.

A vote is set for September.