Preparations ahead of incoming storm

Ports closed and airlines grounded on US east coast 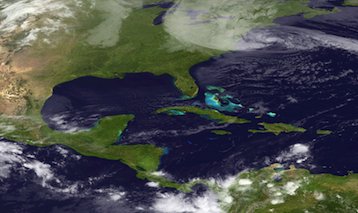 In advance of Hurricane Sandy hitting the US eastern seaboard, the Port Authority of New York and New Jersey has closed all its maritime facilities until further notice. The New Jersey Marine Terminals have been evacuated.

So far, the Port Authority is keeping all of the airports (John F. Kennedy International, Newark Liberty International, Stewart International, Teterboro Airport and LaGuardia) it manages open, but airlines have suspended flights in and out of those facilities.

Also, due to high winds, the Port Authority is banning tractor trailers, car-pulled trailers, house trailers and motorcycles from the George Washington Bridge, Outerbridge Crossing, Goethals Bridge and Bayonne Bridge until further notice. Other vehicles are restricted to 56kph (35mph).

Flights and operations Philadelphia International Airport have also been halted until mid-Tuesday.

Flightaware.com, a flight tracking website, is also reporting that over 95 percent of flights at Ronald Reagan National Airport in Washington, DC, were cancelled, as were the majority of flights at Baltimore/Washington International (Thurgood Marshall) Airport, although some limited cargo operations were expected to continue.

Airports in Boston, Massachusetts and Norfolk, Virginia are also experiencing cancellations. The American cancellations have had a cascading effect on flights around the world.

The storm is expected to hit eastern Ontario and western Quebec later tonight and by late Tuesday it should move through New Brunswick and Nova Scotia.