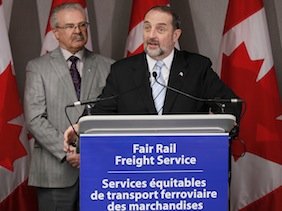 A piece of legislation was tabled in the House of Commons today. Known as Bill C-52, the Fair Rail Freight Service Act, it will give businesses the ability to turn to government-run arbitration if they are unable to achieve a service level agreement with federally regulated railways, including CN and CP. (Provincially regulated railways aren’t affected by this.)

It is a right shippers have been wanting for years, and according to the federal minister of transport, infrastructure and communities, Denis Lebel, it is legislation the government was glad to create. “We’re here for a good announcement, a very happy one,” said Lebel.

“We must ensure that railways and shippers in Canada can work together to expand their businesses. That’s exactly what the bill will achieve.”

The legislation follows a report earlier this year, by Jim Dinning. The Final Report of the Facilitator of the Rail Freight Service Review examined the relationship between shippers and railway companies.

Lebel said the government needed to take this action because of the inherent inequality between rail companies and their customers.

“After a comprehensive study the review panel determined that there is an imbalance in the shipper-railway relationship,” he said. “The recommended the use of service agreements as a commercial tool to enhance clarity, predictability and reliability on rail service. The government supports the panel’s focus on a commercial solution. We believe that commercial negotiations are the best way to improve service provided to shippers, and the overall preferment of the system.”

“Ideally the arbitration process will never be used. That’s what he hope. But we need a fast and inexpensive process to break the deadlocks” said Lebel.

The legislation also provides outlines for how the agreement will be enforced. For every violation of the agreement, the railway will face a maximum penalty of $100,000.

How it will work

The government describes the process as “interest-based arbitration” that will be administered by the Canadian Transportation Agency (CTA). Cases will be heard by CTA  members or quasi-judicial experts or external arbitrators, who will be determined on a case-by-case basis.

At this point, the CTA expects its own members will hear cases during the first two years. Then it will likely add experts and arbitrators to the mix of people available to adjudicate cases. There are no costs for CTA members to handle cases but there will be costs if an external arbitrator is used. In those circumstances, the shipper and the railway will pay the arbitrator’s fees on a 50-50 basis.

Under the terms of the legislation, when a shipper approaches a rail company and requests the creation of a service level agreement, the railway will have 30 days to respond with an offer. If it fails to do so, that’s when the shipper has the right to seek arbitration.

To be eligible for arbitration the shipper has to demonstrate the company has made an attempt to reach a commercial service contract. It also has to provide 15-days’ notice to the railway that it is seeking arbitration.

The arbitration process has a maximum time-limit of 45 days, although the arbitrator has the discretion to extend the process by up to 20 additional days.

Once the arbitrator reaches a decision, the terms of the ruling are valid for one year and will not be appealable. They will however, create a binding and confidential contract.

Arbitrators will have broad powers to impose a wide variety of conditions, depending on the circumstances of the individual cases, and the contracts can include:

The arbitrators are required to consider a number of factors before imposing a decision, including:

The ability to impose $100,000 penalties is only one of the enforcement tools in the act. The act carries over the ability for shippers to complain to the CTA about railway service if they don’t have an existing service level agreement or contract, and provisions still exist that allow shippers to sue railways for actual damages incurred due to a breach of service.

While shippers are pleased with the legislation—representatives from three businesses and associations that rely on rail to move their goods took part in the press conference called by Lebel and minister of agriculture Gerry Ritz to announce the bill—at least one railway executive is less than happy with it.

Claude Mongeau, president and CEO of CN, says railway companies have worked hard to improve the service they offer customers—a fact that Lebel highlighted during his statement—and as such he believes this legislation is unnecessary.

“Jim Dinning, while heading the RFSR’s railway-shipper facilitation process, recognized this fact, saying in his report that commercial forces were already driving improved rail service and advising the government that shippers should take advantage of the improved customer focus of the rail industry. In recent years, CN has launched a comprehensive series of commercial initiatives that benefit our supply chain partners and the Canadian economy. CN is committed to helping its customers be more competitive in markets at home and abroad through better service and a relentless focus on continuous improvement.

“This is why I am troubled by the government’s decision to introduce service legislation that is inconsistent with the facts underscoring improved rail service, as well as the government’s stated agenda of innovation and productivity to foster economic prosperity for Canadians. I also believe the legislation sends mixed signals to customers and suppliers around the world about the government’s approach to commercial markets in Canada.

“CN invites the government to identify specific, systemic service issues that warrant this legislation. We are ready to address any legitimate problems brought to our attention, in the same way we addressed all the commercial recommendations of the RFSR panel. We will continue to make our case that a commercial framework for the rail industry is what Canada needs to foster prosperity.”

He added, “Canada should not put the commercial framework of its rail system at risk through unnecessary and overly burdensome rail regulation. Such an approach would stifle innovation, chill the positive service momentum that’s taken hold and result in potentially unintended consequences for the rail industry and the customers we serve.”

In contrast, Gordon Bacon, CEO of Pulse Canada, was happy with the announcement. (Pulse Canada is an industry association for growers and processors and traders of “pulse” crops (ie legumes—especially beans, field peas, chickpeas, lentils, and faba beans).

“We can never be satisfied that we have a system that is efficient enough. We have to constantly be striving to make the system work better and the legislation…announced today makes sure that we have a balanced relationship with the railways, who play a key role in a very complex logistical system. If you can imagine the kind of logistics involved in moving product from farm to processing plants to port position, when in our sector we are looking at containers and container shipment lines, stuffing facilities and all of the people involved at the port, you can understand why it’s important we have consistency and reliability and we view the introduction of the legislation today as being a key component of building a system that will allow us to continually improve,” said Bacon.

Noting that Canadian propane producers ship 3.5 billion litres of propane by rail, Jim Facette, president of the Canadian Propane Association said that it’s import for shippers and railways to have a strong working relationship.

“In 2008, the federal government began a process to assess the state of the relationship between shippers and the railways. In 2010 we said any forward action should respect four principles: a commercial approach, the right to negotiate a level of service agreement, a right to access a dispute mechanism and a mechanism for oversight that would provide performance indicators,” he said.

“Today the propane industry is pleased to articulate its support to the minister’s new legislation. We know it was not easy. This is a complex issue with each stakeholder’s circumstances being unique, and the relationship with the railway company being no less unique. Hence the challenge to find that sweet spot. That spot that addresses the recommendations of the task force for greater shipper rights, yet respects the principles of a commercially-based approach. This legislation provides an important tool to all shippers. A tool our members may use if they wish. The flexibility allows for propane shippers to ensure their customers receive product in a timely manner. The propane industry believes the resulting legislation does just that. It achieves a balanced approach.”

Mark Thomson, general manager of West Fraser Timber Co Ltd, also had praise for the legislation, saying, “This unprecedented level of government support to the shipping community is greatly appreciated by the forest industry. As Minister Lebel said, the success of this bill will be if we don’t have to use it. Our preference is to move to commercial negotiations at any given time.”