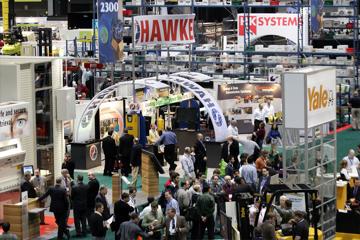 Chicago: After a recessionary rough patch, the materials handling industry is poised to grow in the next few years, according to Material Handling Industry of America (MHIA) chief operating officer George Prest.

Prest made the comments during a state-of-the-industry news conference at the ProMat 2011 trade show held in Chicago, March 21 to 24.

“We’re on the rising, accelerating side of the growth cycle,” Prest said.

The bi-annual show brings together attendees from around the world. The MHIA sponsored the event, held on the 300,000sqft show floor at Chicago’s McCormick Place South. During the show, manufacturers displayed products in areas such as:

In 2010, US materials handling equipment manufacturers saw an 18-percent increase in orders, Prest said, and the association forecast growth of 11 to 12 percent for this year and the next.

The MHIA is forecasting the same growth—11 to 12 percent—for materials handling shipments, Prest said. That’s up from six to seven percent growth in 2010.

Domestic demand, meaning shipments plus imports less exports, grew between three and four percent in 2010. “We’re anticipating that shipments will go to 11 to 12 percent going forward in 2011,” he noted.

All together, the growth figures add up to a brighter picture for the industry, Prest said.

“Here we are in 2011 and we’re a lot better,” he said. “I think you can sense that out on the floor—that’s the good news. We ultimately are looking at several years of growth and prosperity.”

With the industry and the world changing rapidly, information and supply chain visibility has become increasingly important, said Page Simplon, executive director, Georgia Center of Innovation for Logistics. Simplon, who also spoke during the conference, said the change was apparent when looking at the products displayed during ProMat.

“It is an interconnected ecosystem,” he said. “You can’t pull one of the pieces of the puzzle out without it affecting (all the other) pieces.”

Atlanta will host Modex 2012, a new industry trade show for the manufacturing, distribution and supply chain market, Simplon said. The show will host over 500 exhibits showcasing equipment and technology solutions.

Pech also emphasized the industry was headed towards sunnier, pre-recession conditions. Germany’s recovery from the recession has been V-shaped and the country remained an excellent market for innovative materials handling products, he said. As well, the EU boasted 27 countries with common requirements for importing products.

“I think it’s a big market,” Pech said. “Germany and the EU are still an extremely liberal and transparent marketplace, avoiding technical barriers to trade.”