Spacecraft moved from Japan to Kazakhstan 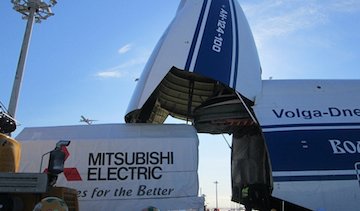 The satellite being loaded aboard the Antonov freighter. (Photo: Volga-Dnepr)

Volga-Dnepr Airlines has delivered the Türksat 4A telecommunications satellite from Japan to Kazakhstan in its latest specialist delivery on behalf of the space industry.

The spacecraft was placed into a special container for its flight on one of the airline’s Antonov 124-100 ‘Ruslan’ freighters. The total weight of the cargo was 60 tons. During the flight and technical stops a constant temperature of 10°C was maintained to protect the satellite’s sensitive technology. The high-value space equipment also required precise and delicate handling during the loading and unloading.

Experts from Japan arrived in Kazakhstan aboard the An-124-100 to participate in the launch of the Türksat 4A satellite from the Baikonur Cosmodrome, which is scheduled to take place in February.

Volga-Dnepr personnel have extensive experience managing projects for the industry all over the world. In 2013, Volga-Dnepr Airlines carried more than 50 space industry shipments and since its launch over 20 years ago, the airline has successfully operated more than 3,500 flights delivering satellites and other aerospace equipment.